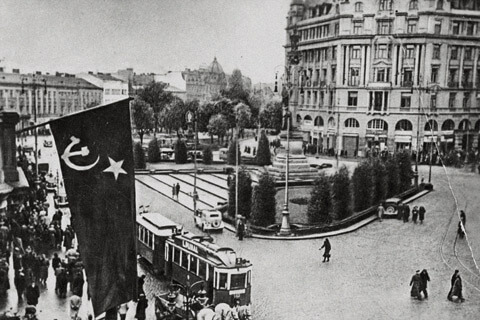 Revolution Outside, Occupation Inside? Testimonies, Archives and Discussions on Sovietization in 1939 - 1941

In the lecture, Professor Jan T. Gross presented some aspects of the Sovietization of Western Ukraine and Western Belarus. He focused upon what Sovietization could show for a broader understanding of the Soviet system as well as for the experiences of dramatic social transformations in general and their consequences. Special attention was on Soviet policy for national minorities and the different forms of repression for local communities. The lecture was followed by a conversation with Professor Gross about the ways new research and archive documents complement or change what had been written on the basis of testimonies from thousands of people. What are the challenges of processing and analyzing testimonies of people who found themselves in a new political system and had become its direct victims? How does the new information influence and shape understanding of the individual experience of Sovietization and the Stalinist period, and Soviet society, state, and authority in general? The talk engaged Dr. Sofia Dyak (Center for Urban History) and Dr. Mayhill Fowler (Stetson University, USA).

The lecture and the talk were held in English with simultaneous translation.