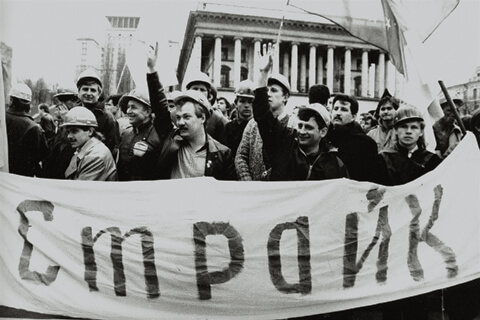 How did it happen that the Donbas was on the edge political struggle in 1989? How and why did miners dare to openly criticize the authorities, with the constant tradition of a paternalistic model of labor relations? Did the miners’ strikes play an important role in the anticommunist movement? What motived the miners? What did they want to change in their lives/in the life of the country? What expectations did they have and what did the events of the late 1980s bring them? Why did their role in the changing political fate of the country disappear?

The screening of the film Perestroika from Below (1989) and to a conversation with Prof. Daniel J. Walkowitz took place. The conversation was about the workers’ mobilization and strikes in the late 1980s, the role of the miners’ movement in the new history of Ukraine, and about the hopes and disappointments of the miners of the Donbas.

The documentary film Perestroika from Below, made by historian Daniel Walkowitz and director Barbara Abrash, is based on a series of interviews with miners in the Donbas – participants of the mass strike of 1989. The miners’ stories told in their own voices present the history of Perestroika, as well as the miners’ views on the role of the worker, trade unions, and the Communist Party in the history of the USSR. The film documents the history of miners and workers. The miners ponder how best to organize their lives and the future of the Soviet society.

From an interview with Prof. Daniel Walkowitz in the journal Spilne.

"...we arrived right in the midst of the 1989 strike and the events just unfolded, regardless of our expectations. People liked to talk about the strike, about what was happening on the streets.... We became friends with the miners: played football with them, visited their homes, I drank a lot in their company .... We filmed everything. We were invited to clandestine meetings where workers discussed new, unprecedented opportunities in the struggle against their leaders – to the point of managing the mines themselves. We also filmed this."

"We did not hear a unified voice of the people, we came across very different positions. There were differences even among young people, especially when they felt the possibility of losing the benefits of state control, corporatism of the old industry."

Event was a part of the lecture and discussion program of the DonKult cultural forum.