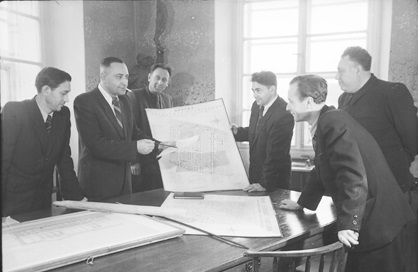 The Renaissance in preparing and adoption of urban strategies that we can now observe in Ukraine brings us back to the idea that the city is emerging not only as a result of chaotic neo-liberal and capitalist processes, but also it could be planned to some degree. Even when contemporary practice of strategy-writing came to Ukrainian context mainly "from the outside," it also has local roots, which grew out from the times of planned economy and attempts to involve science and technology specialists in decision-making process. The community of those who create the visions of the future of the city and who can be called urban experts will be in the core of this study.

To imagine and to plan how the city should develop or function is usually the task of theorists and practitioners in the fields of governance, economics, sociology, architecture, urban planning, engineering, ecology, etc. They adopt terminology to describe the past, present and future of the city, formulate key problems, and propose possible solutions. The composition of this group depended on a number of factors, such as formal and informal power hierarchies, access to economic, social and cultural capitals, the availability of various sources of information, communication spaces, institutional capacities for personal development. Some of these factors have lost their relevance, while the others remain unchanged for many decades. This project aims to trace the specifics of professional milieu of city experts, its transformation over the last forty years, and the response to social changes, to indicate the continuances and disruptions, to identify the sources of their expertise and the specifics of the relationships between professional communities and different audiences, including those who make decisions and who live in the city.

Although the networks of dissemination of expert knowledge are transnational, they need specific nodes-cities. Therefore, the analysis will focus on the example of Lviv, which became an important informational and industrial center during the second half of the twentieth century. The main focus will be made on the group of urban planners who were imagining the "shape" of the city and scientists who had conceptualized the social fabric, the needs of residents, their everyday practices and expectations of urban life. In addition to the structural characteristics of the field of urban expertise, the study also seeks to outline the discourse that representatives of professional communities used to describe the city of the future.

The project is based on biographical interviews, publications and personal materials, both textual and visual, of city experts, and archival work.

November 2022 – “Before and After ‘the Fracture’: Positioning of Lviv Urban Planners”, панель “Professional Elites during Transition from Late Socialism to Post-communism”/ 54th ASEEES Convention, Chicago.

February 2020 – "The Rise and Fall of Underground Tram in Socialist L’viv" / "Cities in the USSR and the Eastern Bloc: Urbanization, Ecology and the Municipal Economy (1917-1991)", University of Erlangen-Nuremberg.

November 2019 – "One Plan to Rule Them All: Architects and the Visions of Urban Development in Late Soviet Lviv" / The Danyliw Seminar on Contemporary Ukraine, the Chair of Ukrainian Studies, University of Ottawa.

April 2019 – "‘People Who Own the Territory’: Expert Knowledge and Urban Planning in Lviv during the 1970s–80s" / "Communist Parties in East Central Europe: Frameworks of KnowledgeAcquisition and Dissemination 1945–1989", Central European University.

Сover Image: "Persikov, the city's chief architect, and public representatives of the city are discussing the project of memorial cemetery at the Hill of Glory." Photo by K. Buzinina, 1953 / Lviv Historical Museum, FN-3088