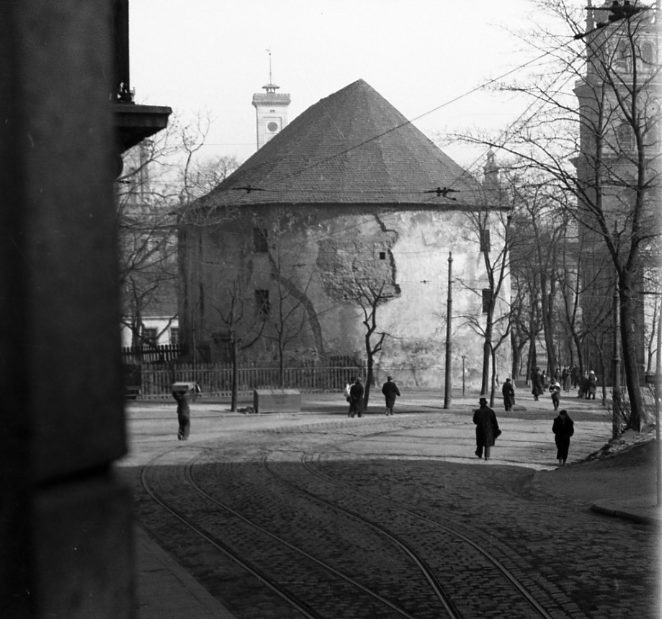 The City and Trauma: Conversations in a Year of Lem

That is why Lwów is irreplaceable to me.

Before the war, I had never even been to Warsaw,

I had never seen Cracow. I can say that Lwów is part of me,

and I am part of Lwów. I am rooted in Lwów like a tree.

In 1965 Lviv's major publishing house Kameniar published a Ukrainian translation of Stanislaw Lem's recent novel Return from the Stars. Lem's take on the utopia questioned the price for a drive to a conflictless society and peaceful coexistence of people. In some ways, it resonated with the period of growing welfare in the world and claims of advanced socialism. Yet there was also a deeper personal story of trauma and forgetting elucidated by Agnieszka Gajewska, a researcher from Poznan. She argues that Lem's texts – Return from the Stars and others – "sprout" from the stories of his personal experiences of the war and the Holocaust. They bring us to the city where he was born after the First World War and from which he had to leave after the Second. The city Lem knew and loved disappeared during the war and as a result of the postwar redrawing of state borders. He left his hometown with the Poles and surviving Jews, who were forcibly displaced by the Soviet authorities, and never returned to Lviv. Yet his city remained; it expressed itself through individual houses and the memories of people who were marginalized in the city and scattered around the world.

Stanislaw Lem saw and sometimes experienced the violence of Germans, Ukrainians, Poles, and Russians, and in various forms, these childhood and adolescent traumas manifested themselves in his later literary works. He was reluctant to talk and write about his wartime experiences and Jewish roots. However, Lem's literary work contains countless encrypted and hidden allusions to his traumatic wartime experiences in Lwów. But this does not mean that we, current Lvivians, cannot return Stanisław Lem to contemporary Lviv. The question is how, by returning Lem, we too can draw on experiences and stories that have radically changed the city and its inhabitants. Lem's decision not to return in person to the city of his birth and youth stands as a reminder of the power of memory, and the right of each individual to retain and honor that memory as a place in its own right.

In today’s Lviv, there is still neither a street named after him nor a memorial plaque on the house where he was born and raised. However, in 2021 with the 100th anniversary of the birth of Stanisław Lem, a prolific and internationally successful science fiction writer and distinctive humanitarian of the twentieth century, there is a chance and a possibility to change this situation. Beyond the plaque and street name, bringing Lem back is possible through conversations on the topics he dealt with and reflections on the experiences he had in the city under occupation. In our program, we would like to reconnect the dots between the city, trauma, and Lem's story.

We will focus on the city: Apart from the famous story High Castle (Wysoki Zamek, 1966), Lviv does not formally appear in the works of Stanislaw Lem. But it is there since the topos of Lviv seem to emerge from Lem’s memory and penetrate the paths of his literary works. The events of the story Transfiguration Hospital (Szpital Przemienienia, 1948) take place in imaginary Lviv, and residents of Lviv can recognize their city in the trilogy Time Not Lost (Czas nieutracony, 1955). Lem is also sporadically mentioned in Ukraine, not only because his work is sincerely appreciated, but also because he was born in Lviv or interwar Lwów. In 1921, when Stanislaw was born, the constant outbreaks of anti-Jewish violence, which lasted from the formal end of World War I in 1918 and the Ukrainians’ defeat in the war for Lviv, finally subsided. Lem belonged to a Jewish family that adopted Polish culture. Despite the political changes and ruptures, the city was their home.

Lem narrowly escaped the pogrom on June 30, 1941, near his home on Horodotska Street, where he was forced to carry away the dead bodies of killed Jews. During the occupation, Lem went into hiding and left the city with his parents in 1945 during the Soviet “repatriation” campaign, which was de facto a forced displacement of Poles and surviving Jews that ended the city’s prewar diversity. Lem miraculously survived the Holocaust when almost his entire extended family and Jewish community of the city were massacred during the Nazi German occupation. Thus another focus of our program is on trauma.

The program will include a seminar, lectures, book presentation, film screening, digital storymaps, and a city walk.

The program is organized by the Center for Urban History and Cafe Philosophique Lviv as a part of the 100th Anniversary of Stanislaw Lem program in cooperation with Lviv City Council and Choven Publishing House.