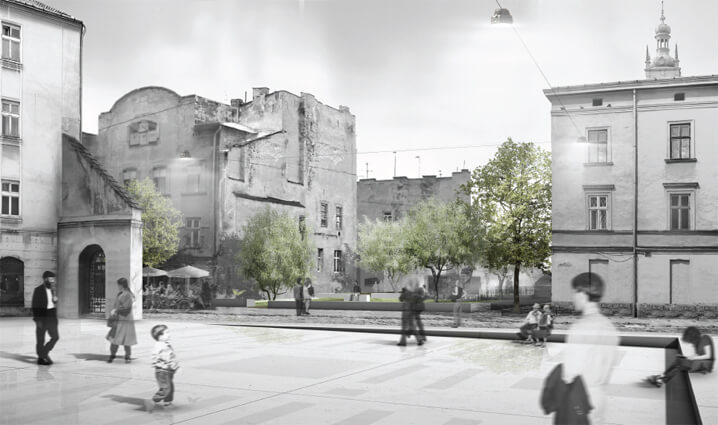 In the Center for Urban History projects submitted to the International Architectural, Design and Landscape Contest was exhibited. All the projects address how to develop space in locations historically associated with Jewish life in Lviv.

The competition was announced by decision #1076 of the Lviv City Administration’s Executive Committee on 6 August 2010. Contestants were to propose how to develop three vacant lots that prior to World War II, when Jews were systematically executed in Lviv, were strongly connected to Jewish life in the city. Contest categories separate out each of the three locations: Synagogue Square—the territory which contained the heart of theJ ewish community; Memorial Park site Besojlem—Home of Eternity—a piece of an old Jewish cemetery; and Memorial Park—The Yanivsky Camp—a plot of land that housed the Yanivsky concentration camp, commonly referred to as the Valley of Death.

The projects of the winners, honorable mention recipients and others will be exhibited. During the exhibit meetings and discussions will be held with contestants, historians and architects. Details on the time and topics will be posted on the Center for Urban History web site.

The contest wanted to bring attention to Lviv’s multicultural past and to cement this aspect of its legacy. There were two interconnected assignments. The first—to draw attention to Lviv’s multicultural past by presenting a new display ofthe city’s Jewish legacy.  The second—to propose how to best utilize the designated spaces to improve the quality of life of Lviv’s citizens and visitors.

The international jury met on 21 and 22 December 2010. They announced winners in all three categories on 22 December.

The idea to hold this contest was born during an international conference held in Lviv entitled The Jewish Urban Legacy and History of Central-Eastern Europe organized by the Center for Urban History of Central Eastern Europe in October 2008. Co-organizers of the contest are the Ukrainian-German Project of the Lviv City Administration and the German Society for International Cooperation through their project Municipal development and restoration of the historic city centre of Lviv.