The Space of Synagogues Staroievreiska St, 37 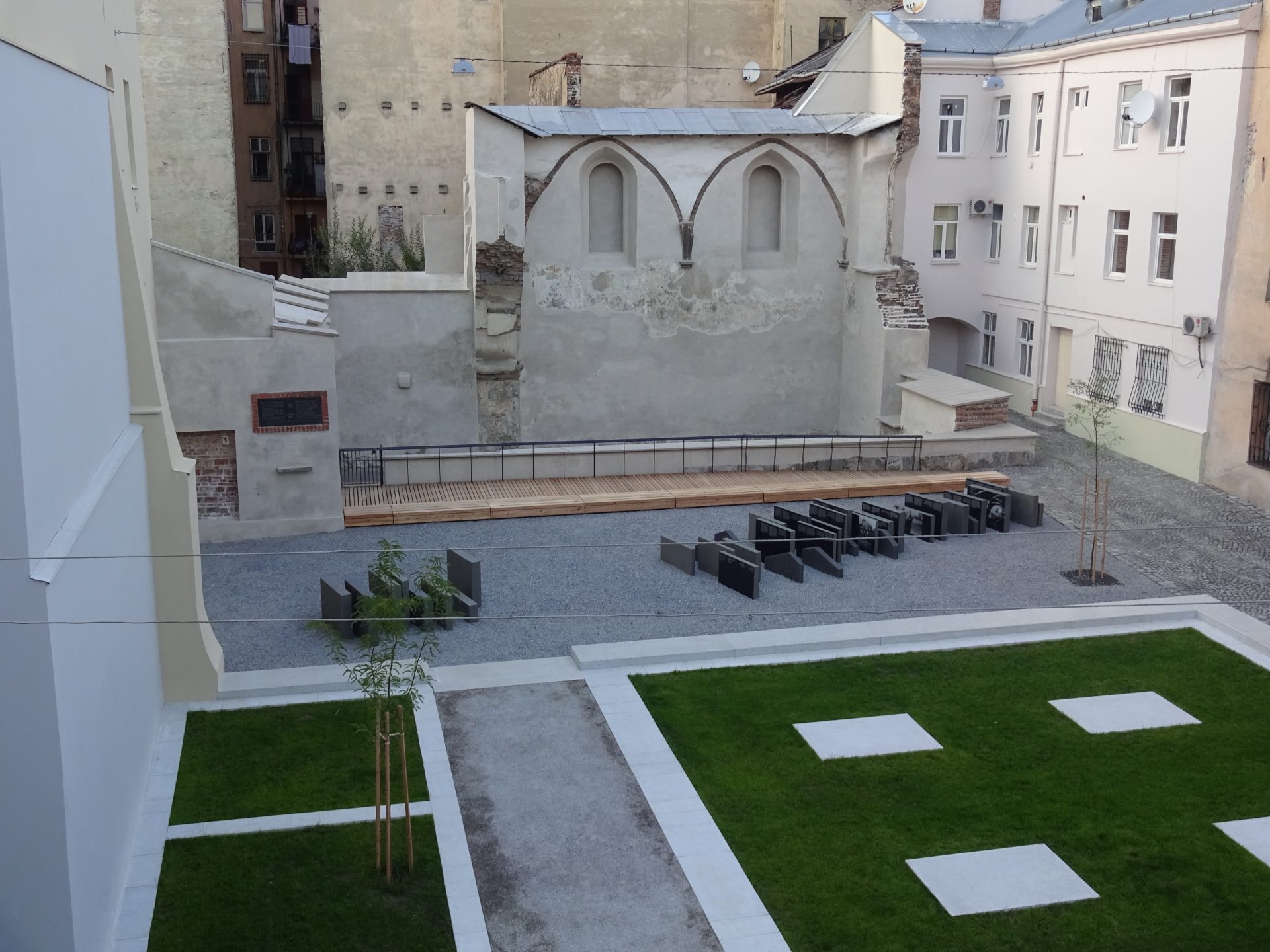 Raising public awareness of diversity and the complexity of heritage sites is a key aim of our public history programs. Exploring and acknowledging Jewish history and heritage as a critical part of the city’s and the region’s history and heritage resulted in an academic conference, summer schools, and a spatial commemoration project, the Space of Synagogues, that become one of the longest-running and most complex public history engagements. On September 4, 2016, after more than seven years of discussions, research, and planning that brought academics, experts, representatives of the Jewish communities and city authorities together, the first part of the Space of Synagogues was opened and officially became part of contemporary Lviv as a new memorial and public space. The project consolidated efforts, knowledge, and experience of scholars, experts, and representatives of the Jewish community of Lviv, of international institutions and city officials, of significant support of donors from different countries of the world.

The initiative was suggested at the meeting of the Lviv deputy mayor with participants of the conference "Jewish Urban Heritage of East Central Europe" in 2008. During the meeting, they discussed lasting concerns about the neglected state of Jewish memorial sites and further steps to change the situation. This meeting gave birth to an initiative of an international architecture competition "Sites of Jewish History in Lviv" that was launched in 2010 to memorialize three sites of Jewish history in Lviv: the former Jewish cemetery, Besojlem, northwest of the city center; the site of the Janowska concentration camp on the outskirts of the city; and the site in the heart of the historical inner city that used to have two synagogues, the Great City Synagogue and the Golden Rose synagogue (Turei Zahav), and a House of Learning Beth Hamidrash. The winning project of the competition to create a memorial space in the heart of the historical inner city and a site of historical Jewish quarters was an architect from Berlin, Franz Reschke.

This site became the Space of Synagogues. and It is an attempt to mark and make visible a story of the building destroyed during the Holocaust and the stories of Jewish inhabitants of Lviv and the region who were killed during the Nazi German occupation. The initiative was aimed at changing the situation of the post-war decades when the plots have become symbols of neglect and non-remembrance. In the 2000s part of the space was fenced off the from prying eyes with a huge metal fence, while another part was occupied by summer terraces of the nearby restaurants. The key motto of the project is “Jewish history of Lviv - common heritage and responsibility.” The practical works to implementation of the project started in July 2015 with the exhibition of photographs by Jason Francisco "The Golden Rose". During the period of over a year, the remaining pieces of the Golden Rose synagogue were conserved. Also, the outdoor terrace of the nearby restaurant located on the part of the Beth Hamidrash site was dismantled. The authentic fragment of the Beth Hamidrash foundations was cleared off concrete and marked with "Venezian Terazzo" white stone, a material often used in local construction historically. The Perpetuation memorial installation with the quotes of Lviv citizens and people connected with the city who were Jewish by origin was built.

While the project is focusing on spaces of destroyed religious buildings, the Perpetuation Memorial Installation is an attempt to give voice to people who used to live in Lviv, who were Jewish, and who put their thoughts down in writing. This installation is a set of 39 stone plates of different sizes, the majority of which were inscribed with quotations and images taken from photographs. 21 quotations from more than 80 suggestions were selected by us together with members of Jewish organizations and communities in Lviv. The inscriptions came from memoirs and diaries, and the works of rabbis, thinkers, professional writers, and ordinary citizens. Each quotation was presented in its original language, and with translations. Among the authors are famous people and ordinary people, men and women of all ages, and children.

Inaugurated within the "European Days of Jewish Culture" program, the opening included an official ceremony, an international workshop, "Mapping Presence: Jewish Heritage Sites, Initiatives, and Experiences in Ukraine," and an art program, “The Art of Memory: Voices of the City.” The opening ceremony was attended by many guests, including Borys-Baruch Dorfman, an elder of Lviv’s Jewish community, Henadii Polishchuk, Counselor of the Israeli Embassy in Ukraine, Oleg Vishnyakov, honorary consul of Israel in Western Ukraine, Dr. Ernst Reichel, Ambassador of Germany in Ukraine, and Andrii Sadovyj, the mayor of Lviv. Adel Dianova, the head of the largest Jewish community organization, Khesed Arie, led the ceremony that concluded with the prayer from Rabbi Siva Fainerman. The evening art and music program, "The Art of Memory: Voices of the City," at the Space of Synagogues opening combined a media installation by Oleh Voronko (UA) and James Fidler (UK) based on texts and quotes from the Perpetuation memorial installation, and a concert of musical compositions by two musicians connected to the pre-war and post-war history of Lviv: Josef Koffler and Mark Kopytman. The Space of Synagogues was the first nominee from Ukraine for the European Union Prize for Contemporary Architecture – Mies van der Rohe Award.

Hopefully, this public memorial space is going to serve as the place for knowledge and remembrance of the long and rich history of Lviv Jews, the place of commemoration place for the Holocaust victims, and the place for dialogue, that with the past and among contemporaries. We also hope that all the experiences and challenges during its realization will help to advance and enhance multiple projects to engage with the history of the city’s diversity, celebrate the city’s vibrancy, but also to face the limits and failures of coexistence as well as the dark pages of the past for better understanding of the legacies of the past and the possibilities of the present.