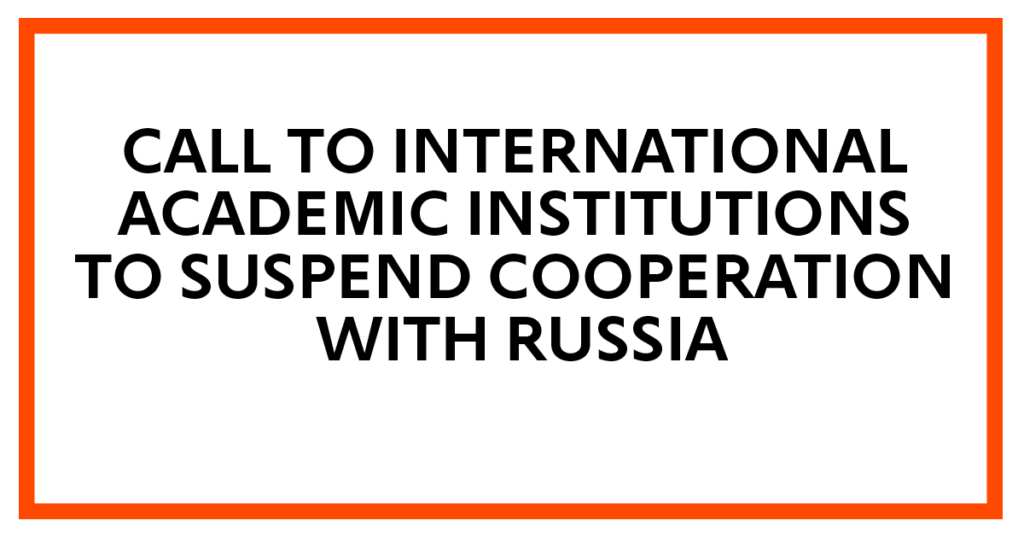 On 24 February 2022, at 5 am the armed forces of the Russian Federation attacked Ukraine, launching a full-scale invasion on our country. It is a completely unjustified attack that, as of 27 February, killed 352 civilians, including 16 children, wounded 2,040, and caused great destruction of civil infrastructure. Explosions, bombings and air raids have hit all major Ukrainian cities. The aggressor’s tanks and heavy artillery crossed the Ukrainian border from the north, the south, and the east. On 27 February Putin threatened to use nuclear weapons in Ukraine. This is a war of a scale unseen in Europe since 1945, and the whole world is watching it happen.

We are grateful to our allies for imposing economic and political sanctions on the Russian Federation. However, the aggressor continues to use scholarly language to justify its aggression, to use academic superiority to reinforce hierarchies and further reproduce injustice and violence. We need to change the optics and rethink lasting inequalities in academic and knowledge production that privilege certain perceived centers such as Russia and silence perceived peripheries such as Ukraine. We object.

On behalf of academic organizations and institutions in Ukraine, we are asking for your solidarity and support. We call to boycott the Russian state now, until it completely withdraws from Ukraine and is held responsible for its war crimes:

🚫 Suspend cooperation with academic institutions and institutes funded by the Russian state;

🚫 Boycott conferences, workshops, lectures organized by academic institutions that are directly and indirectly linked to or funded by Putin’s regime and Russian capital;

🚫 Cancel any cooperation with Russian scholars, no matter how well-published or celebrated, as long as they openly support Putin’s regime, silence its crimes, or do not publicly and directly oppose it;

🚫 Refuse any donations, funding or sponsorship from Russian organizations, their proxies and affiliates based in other countries.

🚫 Cease partnerships with Russian publishing houses that receive funding from the state.

When the war will be over and international justice will be served, we will look forward to not only re-establishing, but also redefining our scholarly networks, collaborations and projects in the hopes of more equality in scholarship and society.

This is a moment to reflect on unequal power dynamics in academia. We urge you to ensure fair and proportionate representation of Ukraine and other countries that have long been lost and silenced in imperial shadows and hear voices that can change our understanding of structures in which we live.

While we support mutual collaboration and exchange, we cannot in good faith engage in scholarly projects with Russia until it withdraws from Ukraine. We recognize that many scholars protest Putin’s actions and have to live in an atmosphere of un-freedom; still, we must acknowledge the deep and lasting legacy of imperial attitudes and actions towards Ukraine.

Please help Ukraine by communicating your commitment to this statement publicly and encourage your peers to follow your example.

We have the power to stop the bloodshed and war. Let’s combine our efforts and end Russia’s war on freedom, democratic values, truth, and the whole civilized world.

The statement on the Ukrainian Institute web-site.