The "Mapping point" installation was designed as a marking sign on the site of Old Jewish Cemetery of Lviv. The installation aimed at preserving the memory of the past, connecting it with the present. 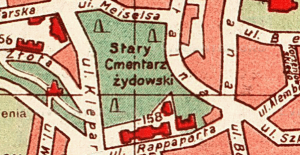 The old Jewish cemetery was first mentioned in municipal records on May 27, 1414. Majer Balaban documented and described it in his works. He mentions that a lot of prominent rabbis and leaders of Lviv's Jewish community were buried here. The cemetery was closed officially on August 22, 1855 because of the epidemic threat. When the Nazis occupied the city in 1941, they imposed their genocidal policies, which included the obliteration of Jewish cemeteries, and the Lviv cemetery was one of the hundreds that were destroyed in Galicia during the war. Already in 1947, a food market is officially known as the Central, or unofficially as the Cracow (or Krakivskyi) Market, was established on the site.

The small park is the only surviving part of Jewish cemetery, hidden behind the former Jewish Hospital building (today a maternity house). As for today, there is no clearly defined entrance: visitors have to go through the maternity hospital’s emergency ambulance gateway and around the corners of the building to access the area, which is currently used by the hospital’s patients and their guests, and by nearby residents. It is difficult to find information about the history of this area in the urban space around. Hundreds of people visit the market every day without reflecting on the history of the place. At the same time, place memory continues to live in people’s consciousness, in folklore, in city narratives.

A project to commemorate the cemetery – "Besojlem Memorial Park" – was developed by the Israeli architect Ronit Lombrozo. It was the winning project of the open competition "Sites of Jewish history in Lviv," organized by the Center for Urban History, Lviv City Council, and the GIZ. Design of the 'Mapping point' installation bench, repeating the form of the historical map sign (2015)

The "Mapping point" installation aimed at presenting the continuity between the two locations – cemetery and the market – in spite of the dramatic rupture of history. Both the Jewish cemetery, almost six centuries old, and the present market, created in the Soviet times, have been vividly important for city life, though in a very different sense. The idea of the installation was not to accuse non-remembrance but to build a link between two modalities of the place – the past and the present. Inspired by the marking sign on the pre-war maps of Lviv, the students created a "mapping point" – a triangular wooden bench that would contain information about the history of this place, texts, photos, and oral history accounts. This point of information would also become the place to stop and think about the meaning of this area. When Krakivskyi market lives its active, noisy, sometimes hard life, full of everyday struggle and work, this place stays quiet and meditative. This is the invitation to sit, rest, and reflect triangular to create a living monument on the map of Lviv.

While preparing this exhibition the students used different methods and approaches – archival research, visual anthropology, participant observation, and in-depth interviews with inhabitants of the neighborhood and people who work at the Krakivsky market. They were impressed that almost every one of their interviewees perfectly knew that there was a cemetery before. They heard the stories about the children who played here in the late 1940s when the cemetery still existed, the legends about ghosts and spirits, and also the rumors about the future destiny of this place. Quotes from these interviews were included in the exhibition. It was an illustration of how history lives at the places with such a complicated and ambiguous past.

The workshop was a part of the summer school  "Jewish History, Multiethnic Past, and Common Heritage: Urban Experience in Eastern Europe."

The exhibition has become part of the public program of the Summer School "Jewish Days in the City Hall" and a festival of Jewish culture "LvivKlezFest."