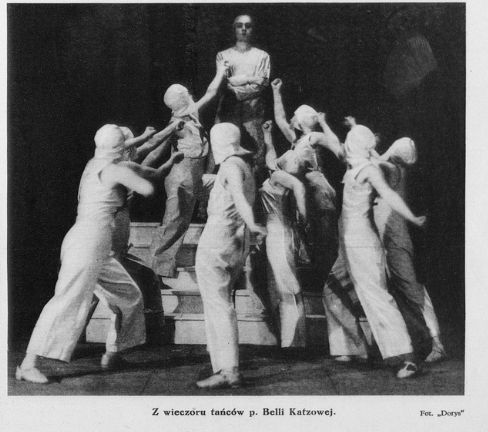 The lecture focused on avant garde projects of women who lived and worked in Lviv in 1920s and 1930. Arts, dance and photography of that time became the fields of experiments and innovative activities that were reflected in projects of an artist Margit Reich-Sielska, of a dancer and choreographer Bela Katzowa and of a photographer Janina Mierzecka. In works of all these women, there are many traces of avant garde fascinations with movement, rhythm and new forms of representation. Closer analysis demonstrates that these women were not only opened for new ideas but also encouraged enough to use them in their own works.

During the lecture, there was a presentation of selected works of Margit Reich-Sielska who used the technique of collage to create visual images that remind some film works of French and Russian avant garde. The other example was a project of Bela Katzowa who implemented avant garde ideas to dance and body movements to create new ways of expressions. The last example of an avant garde Lviv woman was Janina Mierzecka who was a co-author of a project "Workers Hand" together with her husband dermatologist Henryk Mierzecki. Taking photos of hands of working people, Mierzecka combined two functions in her project: scientific and artistic ones. In her pictures every pair of hands look like a sculpture of a pantomime, reminding professions and experience of photographed workers. All these works of Lviv avant garde women demonstrate their enthusiastic approach towards new, modern ideas both in theory and in everyday practices.

Lecture was a part of program "Culture (without) Spaces: On Avant-Garde Heritages in Lviv."  The program was organized in cooperation with Adam Mickiewicz Institute and supported by Lviv City Council and Lviv National Museum.