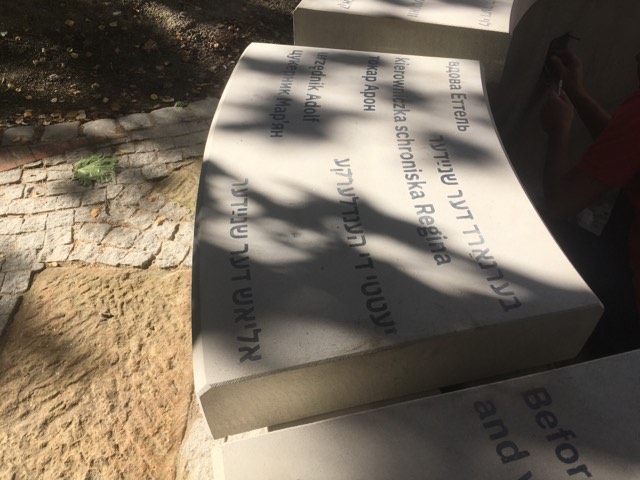 Welcome to the opening of the renovated square in the historic Jewish district of Lviv. This concludes the project "ReHERIT: Joint Responsibility for Common Heritage" that began in 2018 and was implemented by the Department for the Protection of Historic Environment of Lviv City Council, the Center for Urban History, the Laboratory of Urban Space, and the Office of Culture at Uman City Council, with financial support from the European Union.

The project of renovation of the area was developed by the Ruthenia bureau (arch. Olha Kryvoruchko); the work was performed by Welt Capital. The commissioner and coordinator of works is the Department for the Protection of Historic Environment at the Lviv City Council.

Archaeological excavations have uncovered the remains of the city's defensive wall and the foundations of the buildings marked in the pavement. The well, which was the center of the square, was also located. This project brings it back, not only in the form of a fountain — a modern well refers to the project of the mid-nineteenth century, which was implemented on this site. At the same time, it is a place of remembrance, as the well was a key meeting place for residents who were neighbors. The team of the Center for Urban History worked on the project of a new interpretation of the well, in cooperation with historians from different countries and tour guides from Lviv. On the well's rim, you can see the selected names of Lviv men and women who lived around the square from the end of the XIX to the Second World War, and were recorded in the address books of different years. Their names and occupations are written in Yiddish, Polish and Ukrainian, and convey the rich and eventful life of this area. With a few exceptions, hardly anyone of the prewar residents survived the war, but the area remained an important part of neighborhood life. The well-as-a-place-of-memory tells about different personal stories of neighborhood and coexistence in the past. Stories about the inhabitants of this part of the city in the past emphasize the modern understanding that the city has been made by all its inhabitants.

The square and the space of the historic Jewish district have information signs that show the past of the Jewish district of the inner city, the history of its inhabitants, and buildings within urban space. The signage project was implemented by the Center for Urban History.

The square, renovated as a modern public space and marking of historic buildings and places, is part of understanding and respect for the history and heritage of the medieval Jewish quarter.

The opening program will include a solemn ceremony engaging project partners and invited guests, excursions, a quest for children, and a concert.

ReHERIT project focused on understanding the complexities of the history of borders and the richness of European heritage, the great potential of heritage-as-acquisition for local development, and the development of a diverse and inclusive cultural environment. Within the project, the main areas of cooperation were the preparation of materials with guides and teachers, the development of signs in Lviv and Uman, and the reconstruction of the square in Lviv as a case of an infrastructure project to understand the common heritage in the public environment of the modern city.

Department for the Protection of Historical Environment of Lviv City Council