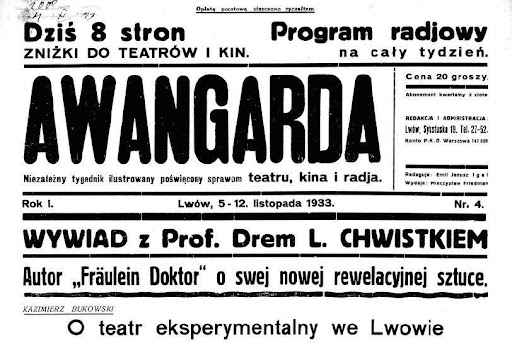 We invite you to a lecture by Andriy Boyarov on the modernist art of interwar Lviv, which continues the program "Urban Scraps: Space, Media and Visuality".

Majaki (in Polish "nonsense") was one of the abject reviews for the exhibition "Futurists, Cubists and Others" that took place in the summer of 1913 at the Industrial Museum of Lviv. Now this house serves as the main building of the National Museum in Lviv. The exhibition was organised by Europe's leading avant-garde gallery "Der Sturm" (Berlin). Before the Lviv display, the exhibition visited other European capitals, from London to Vienna and Budapest, wherefrom it landed in Lviv. The exhibition can be used to keep count of the events in the artistic avant-garde and Modernism of Lviv. The event, as well as a number of later exhibitions and artistic campaigns, made Lviv one of the important centers of Central European Modernism.

The lecture explores into the early history of Lviv photography and demonstrates the interpenetration between the artistic avant-garde and photographic experiments of the early twentieth century.

Bohdan Shumylovych will moderate the meeting.

The video lecture was created as part of the program "Urban Fragments: Space, Media and Visibility" implemented by the Center for Urban History with the support of the Adam Mickiewicz Institute (Poland).

The event will take place live in the Jam Factory Art Center and will complement the "Navigation" program.

Cover Image: the first page of the Awangarda newspaper, where the interview with Leon Hvistek was published, November 1933, Lviv // zaxid.net