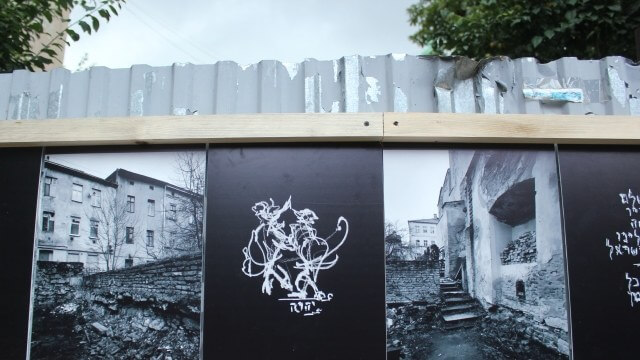 What and how do we remember about the past? How do we mark memorial sites and how do we tell about them? How could public spaces and cultural projects activate local ‘memory work’ on contested historical events? These were the issues offered for reflection to the participants of the Summer School of Jewish History during the workshop "Jewish History Sites in Lviv: Art, Heritage, Commemoration".

The workshop "Jewish History Sites in Lviv: Art, Heritage, Commemoration" was dedicated to the subject of multicultural history of cities in East and Central Europe, to the heritage of annihilated and displaced communities, and to addressing the past and working with local memory in urban public spaces. Present-day modalities and senses of these public spaces are based on the combination of cultural continuity and political changes, heritage practices and collective memories on contested past, architectural forms and activities of different stakeholders (business, NGOs, political elite, ethnic communities, local citizens, a.o.). A principal feature of heritage is the fact that it is visualized, preserved, and reinterpreted from a perspective of present-day problems, challenges, and values. Heritage used as a cultural, economic, and political resource is becoming both a source for diverse identities and a possible area for conflict and ambiguities.

During four weeks, young people from Ukraine, Poland, Russia, and Belarus had worked on the projects to include Jewish history sites into the present-day space of Lviv. Key idea of the projects was to attract attention to communities and people who used to live in Lviv before the Second World War and the Holocaust. The workshop objective was to reconsider modalities of working with history, memory, and multicultural heritage in public space, as illustrated by Lviv, and to develop good practices to implement own initiatives.

The workshop included lectures on visual communication, oral history and art in public space, as well as study city walks, and group work. Theoretical part dealt with interpretative challenges in addressing the past within public space. A course by prof. Jason Francisco "Historical and Artistic Interventions into Urban Space" enlarged on the work with visual materials and representations. Practical sessions focused on the methodology of oral history and anthropological research (Anna Chebotariova), and on designing exhibition projects (Andriy Linik).

City walks and meetings with experts helped the students to get acquainted with the locations. The participants worked in three international groups. Each of them dealt with one of Jewish history and multicultural heritage sites in Lviv:

The groups could choose their main focus (for example, history, biography, art, education, etc.), form, and themes for their projects. The students actively used library materials, information from the Urban Media Archive, and the Lviv Interactive platform of the Center for Urban History, as well as created their own materials (photos, audio recordings of interviews, texts, a.o.). During the project preparation stage, the workshop participants used different methods: interview, participant observation, visual analysis, archive research, etc. It was important to engage urban space and interact with the nearby cultural initiatives and institutions (such as a library, a synagogue, a street café, etc.). Because the students were coming from different countries and cultural backgrounds, a key learning component of the workshop was exchange of experience and peer-learning among the participants. While preparing their projects, the student consulted and worked together with the lecturers of the summer school, the stuff of the Center for Urban History, and with professional designers.

The workshop resulted in the opening of the exhibition on the history of the Holocaust in Lviv at pl. Koliyivshchyny; creating a memorial installation in a park on the site of a former Jewish cemetery, and "At the Neighbours’" Festival at St. Theodor square. Open presentation of the projects took place on August, 7, 2015. The projects of the Summer School participants were an attempt to engage local citizens and visitors into re/thinking of multiethnic history of Lviv, and the importance of preserving its multicultural heritage. Project opening was part of agenda of the Jewish Culture Festival "LvivKlezFest-2015" and a public program of lectures and discussions "Jewish Days in the City Hall".

Authors and curators of the workshop:

The workshop was a part of the summer school "Jewish History, Multiethnic Past, and Common Heritage: Urban Experience in Eastern Europe".