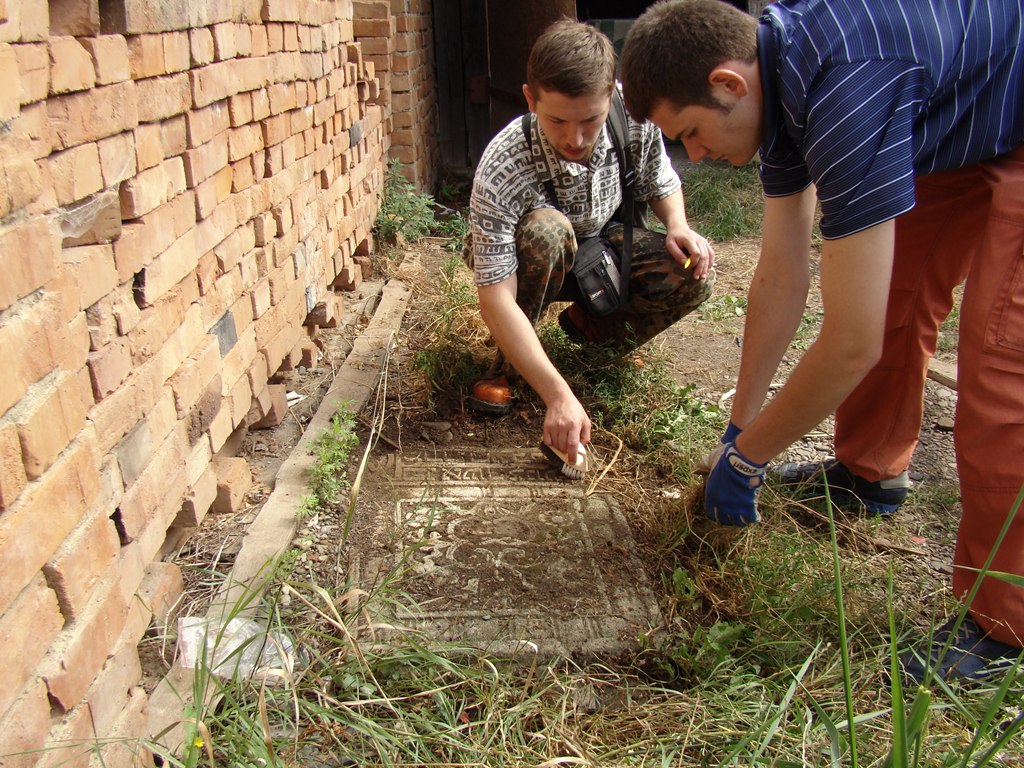 Sniatyn- Archeology of Memory: Discovering and Reviving the Historical Heritage of Galician Town

The focus of the volunteer camp was the town on the border of Pokuttia and Bukovyna, which was on the … of the Republic of Poland and Ottoman empire, Austrian and Ottoman empires, Polish Republic and Romania, and after the Second World War ended up in the south-western part of Ukraine between Ivano-Frankivsk and Chernivtsi regions. The city of Sniatyn was chosen as an example of a border city, because its location in the southern part of Galicia, on the border with Bukovyna makes it especially interesting.

In Sniatyn, as in many other Galician towns, the population once had a multi-ethnic character. Statistics from the first half of the 20th century suggest that close to two fifths of the population was formed by Ukrainians (Ruthenians), more than a third were Jews, and one fifth was made up of Poles. Other than these three main groups, there was also a small number of Germans, Armenians and Czechs. Professional and cultural organizations, places of action, and places of worship, marriage, funerals were organized according to religious and ethnic differences. At the same time, people from different groups constantly crossed paths and worked together, be it in places of trade, work, in schools, in community centers or in military and government services.

The goal of the project was to return the attention of the inhabitants of Sniatyn to the multi-national and multi-religious heritage of their city with the help of the two week program of a volunteer camp made up of youth from Ukraine, Poland and Germany. The program included fixing up and recording the architectural cemetery ensembles of the city. Concurrently the camp become an opportunity for participants of the volunteer group to become acquainted with the heritage, as well as contemporary life of Sniatyn. The work of the volunteers focused on two cemeteries in Sniatyn - Jewish and Christian, which are found not far from one another. The Christian cemetery is still used as a place of ritual events. The Jewish cemetery is in a state of neglect and ruin, and gravestones are being destroyed by spreading tree roots. Both cemeteries are monuments to the culture and history of the city, witnesses of the life and death of Sniatyn’s past inhabitants.

The job of fixing up and renewing parts of the Jewish and Christian cemeteries had set as its goal the preservation of existing monuments, and the organization of the open-air exhibition at the main city square to display the results of volunteers’ work for Sniatyn society. For materials was a way of reporting to Sniatyn the results of the work of the volunteer camp, and showed the past of their city through the experience of young people from different countries. In this way the project "Sniatyn- Archeology of memory" put as its goal not only the acquaintance of youth from different countries and the inclusion of them in the practical work of preserving monuments from the past. The organizers saw that project as their own intervention in the landscape of memory of contemporary Sniatyn.

The project was realized by the Centre for Urban History within the framework of the program "Memoria", which was initiated by the foundation "Memory, responsibility and future" and was led together with the Stefan Batory Foundation. The goal of the program is to inspire young people to look for traces of shared culture and history in the border territory. The geographical focus of the program is Central and Eastern Europe, where for centuries people from different cultures, religions and languages co-existed. The Second World War and the Holocaust, deportations and changing borders after 1945 almost completely destroyed the diversity of these territories.  That is why, within the framework of the "Memoria" program, events are organized with the participation of young volunteers from Germany, Poland, Czech Republic, Lithuania, Russia, Belorus and Ukraine, which are aimed at the preservation of historical monuments, acquaintance with different aspects of border area history and culture and formation of contacts with the inhabitants of these populated points, where the camps take place.

This volunteer camp was supported by the Stefan Batoria Foundation and the Fund "Memory, Responsibility and Future" as a result of the competition "Memoria. Wolontariat dla Europejskiego Dziedzictwa Kulturowego" for 2009.