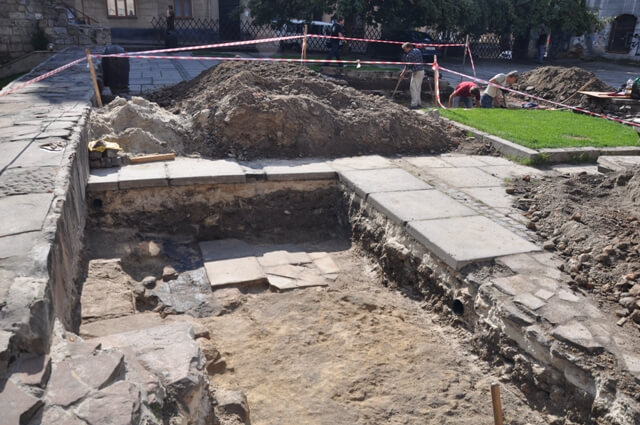 Commencement of archaeological work aimed at establishing the exact location of the foundations of the Great City Synagogue, and the Beth HaMidrash, and gathering information about these buildings that were destroyed in the course of the Second World War. The archaeological research is undertaken as part of the renovation project for the so-called Synagogues Square. The works were odered by the Lviv City Council Administration for the Preservation of the Historical Environment, and carried out by the Rescue Archaeological Service of the Institute for Archaeology, National Academy of Sciences of Ukraine. The excavations were headed by Oleh Osaulchuk and Yurii Lukomskyi, and continued until the end of September.

The archaeological research is part of the implementation of the Synagogues Square renovation project , which is one of the attempts to commemorate the history of the Jewish community of Lviv, raise awareness of the city’s multiethnic past, and demonstrate the need to preserve its multicultural heritage, and educate the community about the history of Jewish Lviv.

In October, 2011, the joint Ukrainian-German project "Municipal development and renovation of Lviv’s old town" invited first prize winner Franz Reschke to Lviv to give a detailed presentation of his project, and gather additional information necessary for its elaboration.

Numerous meetings and conversations with the public, and the professionals in Lviv, access to new documents, historical data and maps, as well as a personal visit to the city’s former Jewish quarter afforded the opportunity better to appreciate the atmosphere of the competition area, and its surroundings. Information and impressions thus acquired were reflected in the further elaboration of the winning project to adapt it to local demands and needs, and to offer a vision of the site that would correspond to the requirements of preserving historical heritage.

The project was co-organized by the City of Lviv, the Center for Urban History of East Central Europe and the Ukrainian-German project "Municipal development and renovation of Lviv’s old town," implemented by the German Society for International Cooperation (GIZ) GmbH. In implementing the project, the organizers strive to achieve recognition and standing within the structure of the city as a site of Jewish history to be honored in a fitting fashion.