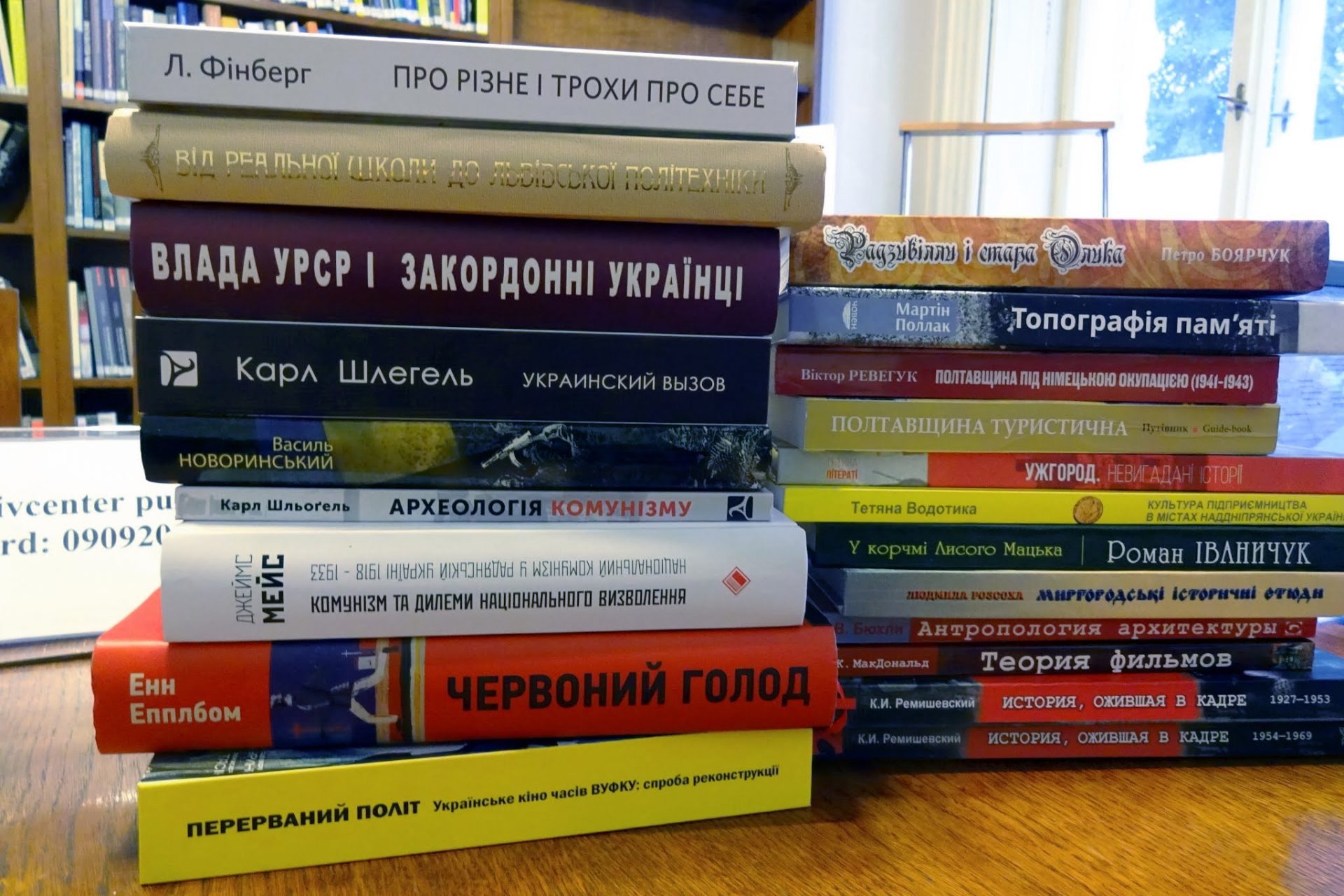 The Publishers’ Forum in Lviv has become a good opportunity to add more books to the Center’s library. These are books in local history, and the history of Ukraine of the post-war period, in visual studies, in art, a.o.

The new arrivals include several works on contested issues of the 20th century history. It is a long-awaited translation of a classic work by James Mace "Communism and the Dilemmas of National Liberation," and also a widely debated book in academic environment and the active readers by Anne Applebaum "Red Famine. Stalin’s War on Ukraine;" and history essays ("Topography of Remembrance" by Martin Pollack, "Archeology of Communism" by Karl Schlögel).

Ukrainian readers and researchers, as well as students, will enjoy the translations of theoretical works "An Anthropology of Architecture" by Victor Buchli and "Film Theory" by Kevin MacDonald. The story on history and film theory could be followed by all means unique publication "History Made Alive on the Screen. Belarus Film Chronicles." The two volumes cover the period of development of Belarus film industry until 1969, and contain an exhaustive list of films and an elaborate analysis of film-making processes, topics, and plots. Additionally, the book has a CD with film fragments. Ukrainian narratives in film history are presented by the book by Larysa Bruchovetska "Interrupted Flight. Ukrainian Film Industry of the VUFKU Time." It is an extremely thorough book rich with sources that actualizes by far the key period in the development of Ukrainian film-making.

Some books in urban studies expand the horizons towards other cities outside Lviv. It is the kindly presented books by Jens Adams: one of them in line with the urban ethnology about one of the districts in Berlin ("Kaum noch normale Berliner") and the analysis of practical implementation of the idea of  "reconciliation through culture" in the EU ("Ordnungen des Nationalen"). Moreover, these are the presented books by Tetiana Vodotyka on industrialization of cities in the Dnieper Ukraine (academic one on "Culture of Entrepreneurship in the Dnieper Ukraine Cities" and a popular text "Space of Opportunities"). Besides, our library received some local history books on Poltava, Uzhgorod, and Volhynia cities.

Some new acquisitions in our library are about the 20-21st century history of art, such as Avant-Garde, Soviet non-conformist and modern art. They are the books by the Artbook publishing kindly offered as a gift to our library. A peculiarity of the books is in broad analysis of historical and social context of art making, and a brilliant visual component. Several books present the findings of the research project and the exhibition about the cult phenomenon of late Soviet period – the film "Shadows of Forgotten Ancestors". Another book highlights the personality of Georgiy Yakutovych as an illustrator of the Kotsiubynskyi’s "Shadows…". The Aeneid project is another result of the research initiative and the exhibition on visual interpretations of this "fundamental" piece for Ukrainian literature. Contextualization of largely underdiscussed area of abstractionism in Ukrainian media is offered in the books on Tiberiy Sylvasha and Ihor Janovych. Historians and art critics will extremely enjoy the publications "Sluchayi", a collection of essays, memories, and reflections recorded from Dmytro Horbachov, a researcher and promoter of Ukrainian Avant-Garde from the late Soviet period until present days.