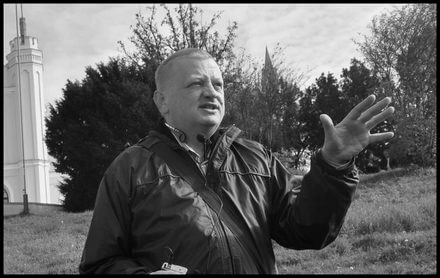 An evening in memory of Robert Kuwalek

A gathering was held in memory of Robert Kuwalek, a Polish historian and researcher of Jewish history and the Holocaust in what is now Poland and Ukraine. Robert Kuwalek was a curator and educator at the Majdanek State Museum, one of the founders of the memorial complex in Bełżec, and author of numerous scholarly papers on the genocide of Polish Jews.

The researcher often visited Lviv, and collaborated with many Ukrainian researchers and research institutions. He organized educational activities to promote Jewish history, and disseminate knowledge on the extent of the Holocaust. Robert Kuvalek studied the history and culture of Ukraine, had good command of Ukrainian, and co-organized an international exhibition dedicated to the Holocaust, "Tango of Death in Lviv: 1941-1944", which was exhibited in Ukraine.

On June 6, 2014, during a recent visit to Lviv, Robert Kuwalek died suddenly.

The evening in memory of the historian united his friends, colleagues, and researchers who have worked with him for a long time on historical and educational projects. They recalled the life of the historian, talked about his research achievements, and remembered this wonderful person, who was always open to new ideas, projects, and meetings.

Organizers: Dr. A. Schwartz International Holocaust Center, the Ukrainian Center for Holocaust Studies with assistance from the State Historical Museum in Lviv, the Majdanek State Museum, and the Center for Urban History.

The interview with Robert Kuwalek by Polish journalist Tomasz Kobylański for the July issue of Słowa Żydowskiego can be downloaded here (in Polish).