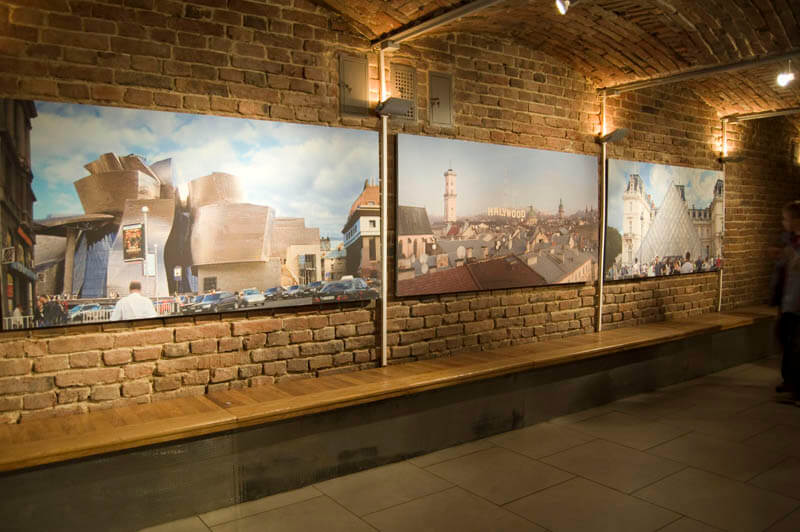 The Week of Contemporary Art

In cooperation with the Lviv Institute of Contemporary Art and in the framework of the Week of Contemporary Art, the Center for Urban History launched three exhibition projects and hosted master classes conducted by well-known Ukrainian and foreign artists.

"HALYWOOD" is play on words. HOLLYWOOD has become a word-symbol defining a movie land, a land of dreams. HALY – in Latin transcription - is the beginning of the word HALYCHYNA. WOOD stands for "forest".
HALYWOOD thus means Galician "forest", Halychyna is a "dreamland" with all its potential and emptiness, its traditions and losses in a wide cultural sense and, particularly, in respect to the Galician film-making industry of the early twentieth century. "HALYWOOD" refers to the hidden potential of Halychyna and Lviv in particular in producing full-length and short films, cartoons and video-art ("KINO-LEV", "KINO-levchyk" festivals, etc.…)
In the exhibition premises of the Center for Urban History of Central and Eastern Europe seven photographic installations were displayed. These showed familiar views of the city of Lviv; but into the cityscape were inserted popular architectural monuments from various international cultural centers (e.g., the Guggenheim Museum, the Louvre pyramid).

The aim of this installation was to show Lviv’s hidden and lost potential and its perspectives as an international cultural center through pseudo-real provocative photomontages.

What is real? For a modern person – an active web user – this question is not a rhetorical one. Certain skeletal notions, events and processes of the virtual world quickly take on the flesh of reality. It is already not reality, but hyper reality (regards to Baudrillard) that emerges when cultural imaginations and knowledge lose connection with social and human reality and become autonomous, that is, simulations (originally this term meant an image, picture or representation - it comes from simulo – to make an appearance, to pretend).
The "avatarium" became one of the key notions of the project. The industrial term "avatarium" (avatara, "ascending", as translated from Sanskrit) refers to the incarnation of God (Vishnu) into Earth heroes (Shiva, Krishna, Ganesh, Buddha, etc.).
An avatarium on the Internet is a small static image (often limited in its size by the number of pixels) that reflects the permanent or temporary essence of a user. Usually it is not a real photograph of the user. The avatarium is reflected in the profile of a user of a forum or site and helps to make a certain impression on a virtual partner.

Aim of the project: Research of the discursive environment of virtual and sacral categories, inter-imagery communication; Visual and contextual collision of actually existing and virtual objects and simulation; Search of meaning and identification; Actualization of the very issue of "sacral" in the environment of the active communication of simulations and virtual reality.

A third exhibition installed by Juniya Koval was set up in the courtyard of the Center for Urban History; this part of the exhibition found again other ways to question the borders between real and surreal through artistic means.

Apart from the exhibitions, five events took place in the Center, all of them within the framework of the "Week of Contemporary Art" in Lviv: