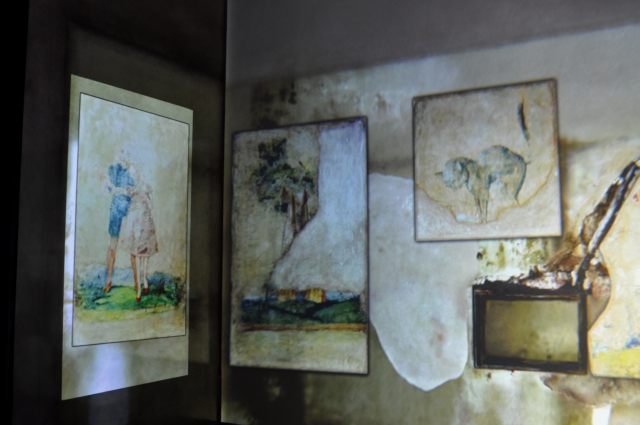 "The Picture Chamber of Bruno Schulz"

Live-Stream-Panel from the Center for Urban History, Lviv to the E-WERK Freiburg, Germany to the opening of the Art Exhibiton The Picture Chamber of Bruno Schulz – The final work of a genius – Mobile Installation by Benjamin Geissler at the E-WERK Freiburg /Br., Germany

The Picture Chamber that was created by Bruno Schulz in 1942 under German occupation and rediscovered in 2001 by Benjamin Geissler while shooting the documentary Finding Pictures and destroyed a short time later by agents of the Yad Vashem Memorial and later still by the Ukrainian Ministry of Culture when pieces of the chamber were removed. After years of systematic efforts, Benjamin Geissler has reconstructed the final work of the genius in a true-to-scale multi-media installation on the occasion of the Bruno Schulz Year 2012.

Born as an Austrian, lived as a Pole and died as a Jew – Bruno Schulz is one of the most important writer and renovator of the Polish language of the 20th century: world literature translated into 39 languages. But his art career began and finished, as his life as graphic designer and painter in the Galician town Drohobycz.

Each generation discovers Schulz new and deeper. Because he delivered not only a description of his world, but he created at the same time a kind of philosophic world vision. Grotesqueness in a fairy tale tongue, abyssal fables, fantastic love stories, the microcosm of father and son – all is permanently exposed to transformation, but at the same time resistant to extermination. A visionary whose creativity was intimately connected with Drohobycz.

The works of Bruno Schulz were born under the impression of changing territorial systems of government and industrialization within the haven of a multi-ethnic and multi-religious region. For an alert and intelligent observer the changes in the scale of values lay bare. In the same philanthropic way he lived his life. Bruno Schulz’s works resist the simplifications which were charged with resentment. They are permeated by the philosophic strength of the individual. By transgressing borders, they elude all means of control, and in their vastness and beauty they penetrate the realm of dreams; they invite the reader/viewer to sound out their own inner realm with great care, yet without negating the threats and social destruction of life’s diversity. A mirror that also reflects the dark shadows of reality in the world today.

The Panel held in German with simultaneous translation in Ukrainian by Roman Dubasevych, University of Greifswald, Chair of East and West Slavic Philology, part of the discovering crew of the Bruno Schulz Murals at Drohobycz 2001.

We are working on the international touring exhibition of the Pictures Chamber also in the Ukraine and Poland.

More information’s for interested exhibitors and venues on request: www.benjamingeissler.de