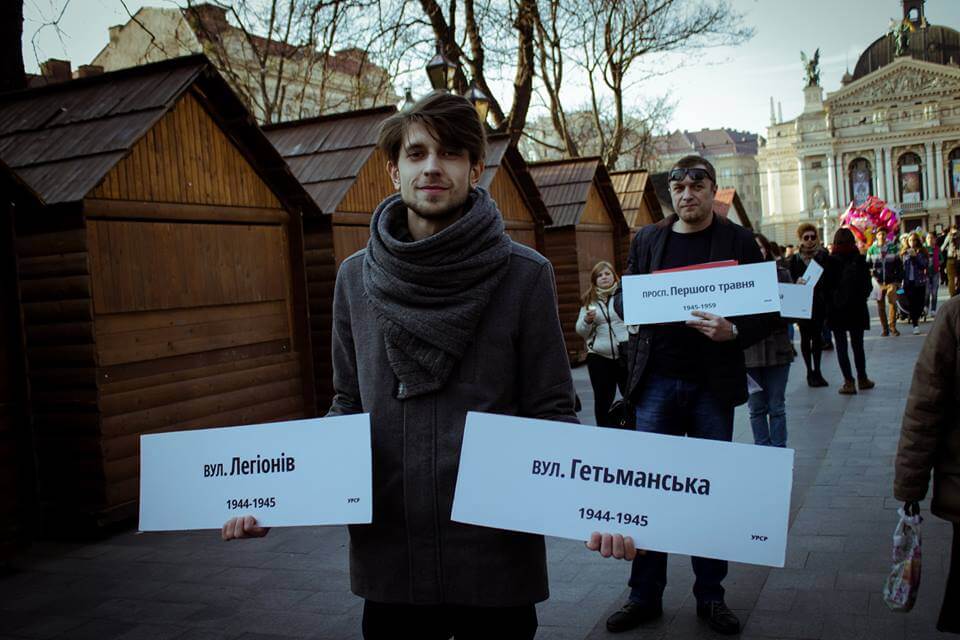 What do street names tell us? What information is hidden behind each of them, and why is renaming them interesting for us? Analyzing past street names, one can "reconstruct" the city's history, see it as a layering of different symbols and meanings, a crossing of different ideologies and cultures. Lviv with its complex multiethnic history is an example of this: its main street – Svoboda Avenue – during only the Second World War was renamed 5 times.

Using the example of Svoboda Avenue, we tried to draw the attention of residents and visitors to the process of renaming streets and show that it carries a lot of information. To this end, on March 23, 2015, we organized a two-hour performance "Biographies of Streets" in which passers-by had the opportunity to learn about the history of renaming the main street from the late seventeenth century to this day. Thirteen volunteers held signs with the historical names of the avenue and told passers-by about each renaming. All interested people received a flyer with a short history of Svoboda Avenue and a description of the Center for Urban History’s project "Database of Lviv’s Street Names," as part of which was held the performance "Biographies of Streets." The performance was the first public presentation of this database and aimed to draw attention to both the project itself and the process of renaming streets in general.

A public presentation of the online project "Database of Lviv’s Street Names" will be held in mid-May, and now we invite you to test it.