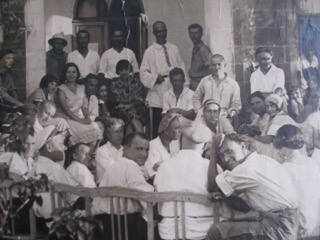 There was a presentation of the just-published book "Beau Monde at Empire's Edge: State and Stage in Soviet Ukraine"by professor Mayhill C. Fowler.

This book analyzes the emergence of the Soviet cultural infrastructure in the 1920s and 1930s: what happened when the state took over full control of the arts, and how did Moscow become the center of Soviet culture for audiences, artists and officials across the eleven time zones of the USSR? The focus, however, is not on Moscow, but on the regions, and not on literature, so often discussed, but on theater. The story then involves a collective biography of a group of young people who rose from lower-class towns through military service to become elites in Soviet Ukraine. They were the beau monde, a world of artists and officials making culture both Soviet, but also Ukrainian. For them, this meant ethnic particularism, figuring out how to negotiate the Jewish, the Polish, and the Russian while constructing a "Ukrainian" culture. Using materials in Russian, Ukrainian, Polish, and Yiddish, this book attempts to re-narrate Soviet culture: a culture not divided into artists and officials, but with artists and officials intertwined; one not separated into separate ethnic stories, but one that explains that ethnic separation and its consequences; and one that pulls back to a larger perspective to reveal the transformation of the artistic space of the Russian Empire to that of the Soviet Union.

The presentation was moderated by Bohdan Shumylovych, researcher at the Center for Urban History and PhD candidate at EUI (Florence).

The presentation was held in English with simultaneous translation.