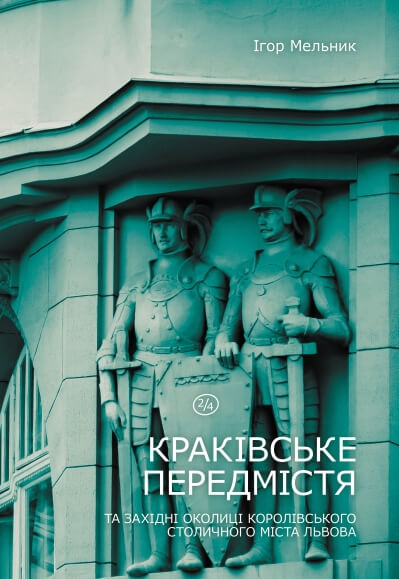 The presentation was moderated by writer Nadiya Morykvas, Ph. D.

"Central Lviv: Its Every Street, Square, Church, and Building"

Downtown Lviv (Seredmistia), a city within walls, is a unique urbanistic ensemble, which preserves the original planning structure, and many urbanistic, architectural, historic and artistic landmarks. The book, after all, is the first one to include all of the streets and buildings (including those long gone)nof the central part of Lviv, which became a separate district of the Royal Capital City of Lviv in the late eighteenth century. Back then each stone house had its own name, reflecting the names of its owners, or the notable features of the building itself.

Krakivske peredmistia is another book in a series dedicated to Lviv's streets and houses. The Cracow Suburb included the western part of the Royal Capital City of Lviv. After 1871, number plaques in streets of the Cracow Suburb were white with green borders. The conscriptionary numbers of the buildings of this district, introduced by the Austrian authorities, had the numeric code of 2/4. The green cover of the book thus reflects this tradition. The book also includes information on townships and communities that lay outside the quarter: Levandivka, Syhnivka, Riasne, Bilohorshcha, Zymna Voda, Rudno, Sknyliv, and Sknylivok. Some of these territories were incorporated into the city at various times; others remain beyond city limits, but are connected to the city through countless old and new relationships, and contain important objects and landmarks that deserve attention.

Both books continue the original series on Lviv’s streets and houses. The first, introductory work in the series (planned for publication over 2009 – 2012), was dedicated to "Lviv’s streets and houses, walls, corners, suburbs, and other distinctions of the Royal Capital of Galicia" (Lviv: Tsentr Yevropy, 2008). 2009 saw the publication of a book dedicated to Lviv’s Novyi Svit district, and southern environs. Two books, dedicated to the High Castle and the Zhovkivske suburb; and to the Lychakivske Suburb and the city’s eastern environs (co-authored by Roksolana Zahaiska) were published in 2010.