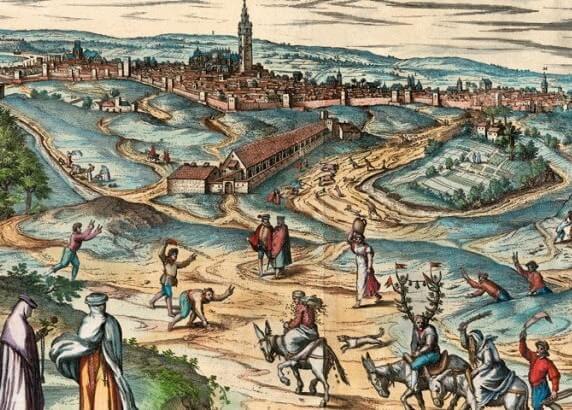 City History in Maps: Possibilities and Challenges of the Digital Era

The presentation of cities in maps and plans is not only one of the oldest methods of cartography, but also an excellent source for the study of how we imagine space, society and the city. We can consider the atlas Civitates orbis terrarum, published between 1572-1617 by Georg Braun, the beginning of the urban cartographic era. The atlas includes 546 panoramas, views, and plans of various parts of cities from all over the world. With the spread of printing in the 16th century we can observe an explosion in the representation of cities thanks to various kinds of maps; this explosion has only intensified in the 21st century with the emergence of digital maps programs like Google Maps, Open Street Maps, etc. Digital technology not only shifts our ideas about maps, but also allows us to create our own maps, or personalize maps that already exist.

Today maps have acquired a new role for research. From the 1980s scholarly interest in the research of space increased, which led to the "spatial turn" in the humanities. The increase in digital approaches and the use of GIS (geo-information systems) for research have made maps one of the key research components in the humanities. The combination of these approaches, as well as the study and use of maps in various disciplines, such as social history, cultural studies, cultural geography, and memory studies, opens up new possibilities, new questions, and new interpretations.

In the seminar "City History in Maps" we presented three projects: "Historical-Topographic Atlas of Silesian Cities," "Historical Atlas of Lviv: Maps, Texts, Reconstructions" and an updated version of the Center's own website "Urban Maps." These projects represent different uses of digital and traditional printed possibilities in maps, and offer an opportunity to discuss the contemporary situation and challenges for research and the use of maps, particularly in Central and Eastern Europe.

Lviv and the cities of Silesia are places that not only were formed on the borders of various cultures and states, but also experienced radical changes in the past century. In these cities lived various religious and ethnic communities, which often had different views and projected various visions on the past and future of their cities.

In this discussion we invited speakers and participants to discuss how the use of digital technologies influences not only their own research, but also an understanding of past cities and regions, which belonged to various states in various periods, and in the 20th century were marked by radical changes of borders and mass deportations.

Examining atlases and maps of these and other cities we can ask not only what is represented and how it is represented, but also how and what did not enter the atlas, or what was not represented on the maps. How did political, cultural and social contexts influence the representation of space on maps? How did maps not only represent these contexts, but also serve as one of the primary instruments of their creation? What possibilities does the "digital era" give for the study of cartographic materials, which are preserved not only in various institutions and collections, but often also in various countries and continents? Can digital technologies help create international projects on cities important for the history and culture of two, three, or even more peoples? Do digital projects add to printed publications, or are they slowly pushing them out of relevance? What are the good practices that are worth borrowing, that have transformed, that already have a significant history of growth? What are the challenges facing researchers due to the increase in accessible maps and other related sources, the necessity of acquiring technical skills for interfacing with software, the importance of incorporating methodologies of various disciplines and developing new approaches to carrying out research?

5.15 Presentation by Dariusz Gierczak (Herder Institute, Germany) on the "Historical-Topographical Atlas of Silesian Cities," which exists in printed and electronic versions and presents the spatial development of 34 selected cities of Silesia from the early 19th century up until today with the use of aerial photography, graphics, photographs, and newspaper articles.

6.00 Presentation by Serhii Tereshchenko about the updated version of the Center's online project "Urban Maps," which publishes and analyzes old maps of the city with the use of digital technologies. The project shows 90 maps from 19 cities throughout the territory of Ukraine and Poland. The project also includes the largest online collection of maps of Lviv.