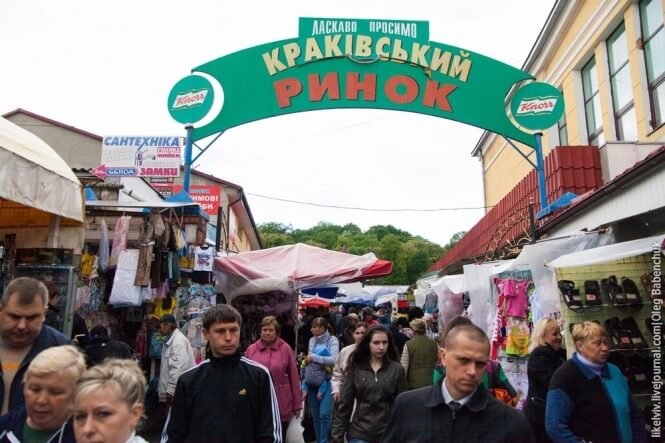 Bizarre Bazaar is a travel course which will bring students from the University of Michigan Taubman College of Architecture and Urban Planning to Ukraine and Poland for a 4-week workshop. The course will study architectural typologies of consumerism - primarily that of the bazaar. The bazaar as a defining urban space has been foundational to cities and serves important social and communal functions. However, in the most developed countries in the world, bazaars have been largely replaced by shopping malls and big-box stores. In contrast, bazaars in Post-Soviet regions show how markets have adapted to modern life while holding on to the architectural typologies of units, stalls, and market halls.

The role of markets in Eastern Europe extends beyond their role as infrastructure or urban spaces and directly into the domestic realm. For many disenfranchised groups, such as women or the elderly, who lack either the educational opportunities or cultural capital to work outside the home in professional fields, they represent opportunities for sustenance and even economic mobility. Through this study, we will understand how markets stitch together disparate communities and invigorate public life. We will interrogate how markets fulfil a collective desire in the city for spaces where people can safely congregate and interact in a spontaneous, unscripted manner. As these spaces come under increasing threat by new developments, we will discover how their important role as social condensers and spaces of entrepreneurship might possibly be sustained.

Before beginning the travel course, students will do readings about the history of urban spaces, bazaars, the architecture of Eastern Europe, and the history of Ukraine. While in Lviv, the students will engage local experts through a cooperation with the Center for Urban History of East-Central Europe. Working with the Center, students will meet with local historians who can frame the questions of the course within the larger context of the history of Lviv and the geographical region. Students will keep a public travel blog/website as a way to document their experiences in different cities. Students will take photographs, make sketches and drawings, and explore the public spaces of the city in order to understand how they are used by different user groups. At the end of the course, students will display their work at the Center for Urban History and make public presentations of their findings. This short travel and study experience will expose the students to new ways of thinking, researching, and understanding the way culture and architecture work together to shape the built environment.

In particular, on May 27, an architect Olha Zarechnyuk and a historian Tomasz Jankowski took participants on a tour around Lviv. The main aspects covered included peculiarities of the urban structure of Lviv; how different cultural communities impacted the creation of the city and its architecture layers, and also how they could be deduced in the present space of the city. The tour focused on several buildings in the central area that have acquired different senses and meanings, that often make a controversial heritage, especially in the light of the radical change in population in Lviv during the 20th c.

On May 29, Center's Guest researcher Diána Vonnák will take the students on two hours long walking tour, showing them differently, contested public spaces with religious significance, explaining conflicts that erupted around them in the past and the present. Notably, the walk will include the Dominican Cathedral, the Golden Rose Synagogue and the St. George Cathedral.