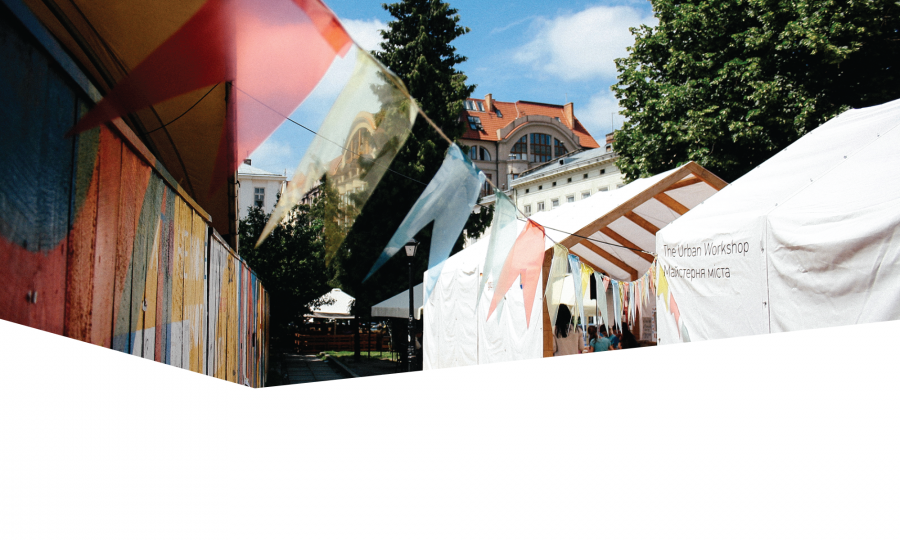 For the fourth consecutive year, the Center for Urban History was cooperating with the Urban Workshop project. The project  in the pavilion on St. Theodore’s Square.

The Urban Workshop was an open platform for NGOs, initiatives, the local government, and active citizens, which is implemented by the Ukrainian-German project Municipal Development and Rehabilitation of the Old City of Lviv (GIZ). Among the many activities there were exhibitions, workshops, seminars, film screenings, games for children, and more. The project was a platform for interested persons, citizens, and visitors alike to start a dialogue on current topics for the city, including the restoration and preservation of historical heritage, the bicycle infrastructure, urban landscaping, the infrastructure for people with disabilities, and more. T

The Center for Urban History participated in the workshop with the following events:

This year in the workshop we implemented the educational project "Your/My Stories," which was held as part of both the Donkult Cultural Forum and the Urban Workshop. The program was centered around the topic of the city and the involvement of children and young people from the occupied territories. The main purpose of the events is to create a space where children and adolescents can share personal experiences, tell stories about their cities, and look for new ideas to create a comfortable and friendly city. The project, designed for different age groups of children, included an animation school, historical workshops, lectures, and creative workshops.

The idea behind the creation of the animated movie "The City in My Arms" is to show how children with their thoughts, dreams, and hands can change the city. The program brought together children from different cities, with different experiences and views of the city. From theory to practice, participants determined and create the city in which it is fun and comfortable to live. Classes were held three times a week (from June 12 to 21) in the space of the Urban Workshop.
"Donbas History through the Voices of Children" is a historical school-workshop on the ancient and recent history of the city for adolescents. Participants worked with historians so that in an interesting and interactive way they can present the history of the region. The presentations were open to everyone and provided an opportunity for people to discover a "different Donbas," the Donbas as seen by children. Classes were held once a week (from June 10 to 28) in the space of the Urban Workshop and the Center for Urban History. The target audience is children and adolescents, aged 13-18.
"Meeting for Coffee: How to Talk to Children about Difficult Topics" is a conversation intended to involve educators, parents, and teachers. The main focus is in an informal setting to reflect on ways and formats to have conversations with children and teenagers about "grown-up" topics such as war, conflict, and trauma.

The Urban Workshop also hosted projects that have already been presented earlier and had positive reviews.

In the area of ​​St. Theodore’s Square was on display the outdoor exhibition "Searching for Home in Postwar Lviv: The Experience of Pidzamche," which had been presented few years ago in different locations of the city. During the Urban Workshop, one could also be re-acquainted with the interactive map of Pidzamche "Voices of the City."

In the space of the pavilion and the social cafe U Susidiv, all month one could play the educational game anti-monopoly "Pidzamche: A New Life for the Neighborhood."