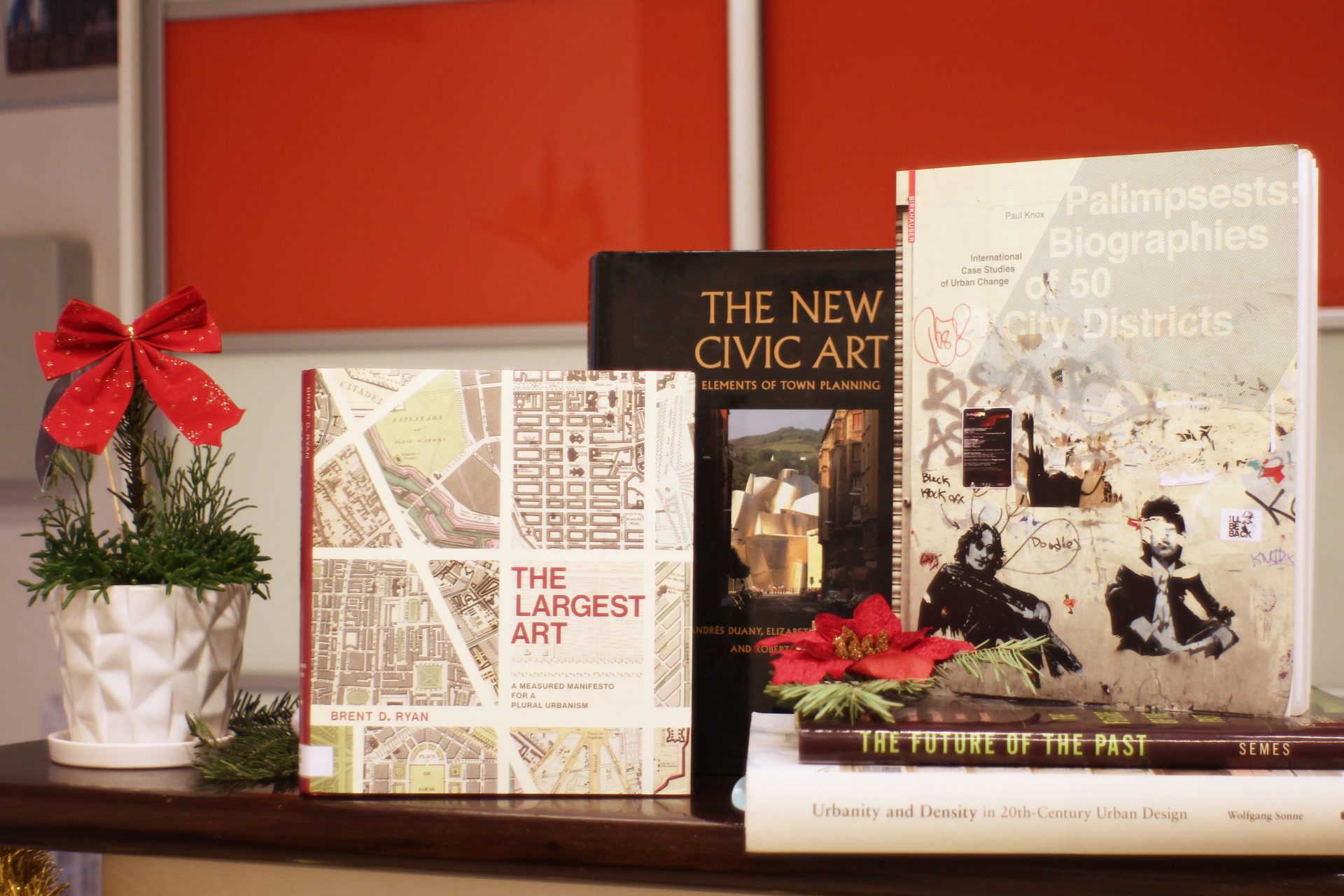 This year, the library at the Center for Urban History received US publications about architecture and urban studies presented by a Fulbright scholar Peter Bejger. Peter is an independent author and film director who joined the team of the Center from January until September, 2018. Over this time, he has conducted his research about architectural heritage and identity of Lviv, and ran a series of film screenings and discussions about architecture through the lens of US movies. Find below the review of some of the books, and welcome to the library.

What makes a bright and unique nature of city districts? The author takes us on a captivating journey through the fifty districts in the cities of USA and Western Europe, such as Ancoats in Manchester, the first industrial district in the world, or the Zähringerstadt in Bern, a medieval inner city. Most of them are not the model text-book examples for the history of architecture or town planning. Easy to read and based on detailed research in architectural, economic, and social history, the book allocates two or three double-leafs for each district, with brief reviews and photo illustrations carefully selected by the author. In addition, there are references for deeper insights into the topics. The author pays much attention to the historical development and overlapping of several epochs and lifestyles within one space, which he considers to be fundamental. Dr. Paul Knox was Dean at the College of Architecture and Urban Studies at Virginia Tech (1997-2006), with several books on urban studies, small towns, and urban transformations.

"Region is the largest scale of civic art. Organizing metropolies is one of the most ambitious urges of the mankind, while concepts of this large scale have existed since the time Louis XIV conceived of France as broad fortified garden." Taking city planning from the perspective of the region, the city, the streets, and the city districts, the authors compiled a large atlas of urban models, approaches, and theories, mostly (but not only) from Europe, USA, and China of the 19th and 20th century. The authors Andres Duany, Elizabeth Plater-Zyberk, and Robert Alminana are practicing architects themselves. The first two of them implement ideas of New Urbanism. This trend started in the 1980s in the USA, and addresses the construction of small, environmentally friendly cities that are not car-oriented, and employ elements of conventional, pre-modernist planning.

The Largest Art. A Measured Manifesto for a Plural Urbanism (2017)

If designing a house is a difficult complex task, then could a city be designed? Current urban practices are dominated by architects and architectural thinking that is why many problems cannot be addressed at all, according to the book author Brent Ryan, MIT professor. Urban planning is not about the scaled-up architecture but about a comprehensive/plural area involving many actors, such as owners and creators, including various ownership forms, and long time for the implementation of urbanistic projects. All of these shall be taken into account rather in regulating development of cities, but not really in their design.

The author explores cases of cities, historical models of design and implementation of projects in the 20th century, as well as theoretical frameworks, and states that pluralism shall be a mandatory attribute of urban planning. There shall be plural scales, time, ownership, actors, as well as incompleteness and flexibility. The book has been recently presented in Ukraine, when the author participated in an independent studio "Postindustrial Kyiv. Transformations in Ukraine" jointly organized by the Massachusetts Technological Institute and the SAGA Development company, in partnership with urban curators.

Please, be reminded that the library operates from Monday to Thursday, from 10 am to 6 pm, and from 10 am to 5 pm on Friday. Welcome!