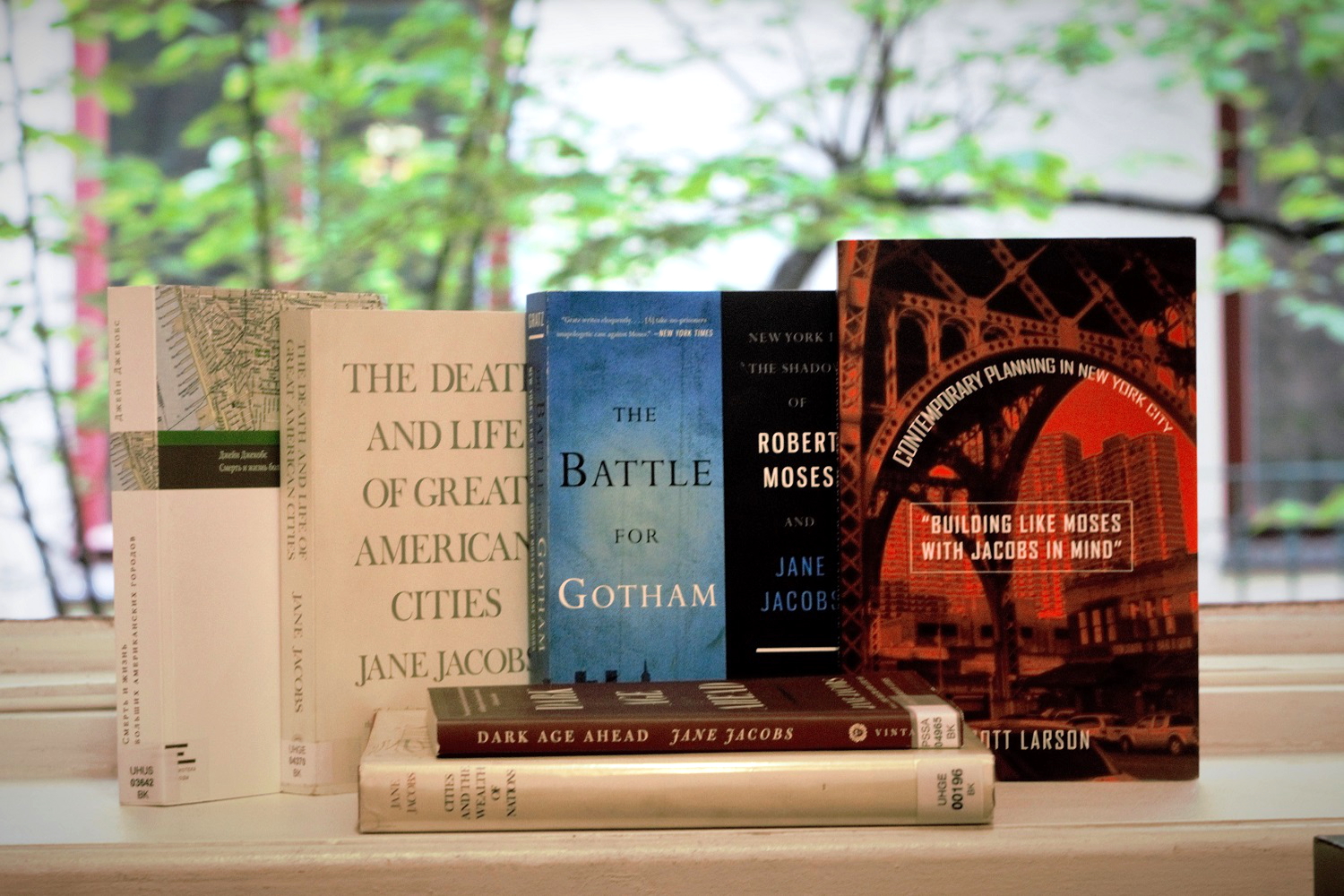 This year, we watched a documentary about Jane Jacobs (1916-2004), a well-known civic activist in the field of urban planning and development. The screening and the topic it raised provoked huge interest and further discussion. That is why we decided to introduce to you the texts by Jane Jacobs you can find in the Center’s library, and also the books that explore her activities and their impact on the cities and their development today.

The "Life and Death of Great American Cities" (1961) has been one of the most influential books in the field of urban planning for 57 years already. It is the first of the seven books by Jane Jacobs. The author wrote it in between the protests and court hearings against Robert Moses, chief architect of New York. He advocated for "grand projects" and saw the solution to the problems in the city in complete demolition of historical neighborhoods and displacement of their residents to new quarters, in large expansion of streets and in building the highways across the old city neighborhoods.

Jane Jacobs was fascinated by the intense city life in New York and was very detailed to describe her observations in newspaper and magazine articles, such as in the Architectural Review. She lived in West-Side on Manhattan, next to the Washington Park, a center of active city life. One day, a chief architect decided to build a large highway across the park. This case made Jacobs embark on the protection campaign for the park and lead a powerful movement of the citizens to the victory. It was not about banning any projects, but about preventing any fundamental failure of the government when drafting any such projects. She did not agree with the fact that in designing such projects the authors did not account for (and never planned to take into account) the experience and needs of residents themselves for the sake of who the projects were designed, at least pro forma.

In this book, Jane Jacobs used her own life experience to describe which streets or neighborhoods were safe, and which were not; which parks were convenient for visitors, and which were not. It went largely against the approaches of the architects and city planners. In the middle of the 20 th century, it was believed that all functions in the city shall be divided, that housing, public buildings and industry shall be placed in separate areas, divided by parks. Instead, Jacobs was trying to prove that such approach looked nice on the drawings but never justified itself in the real life, rather leading to creating some dangerous streets and neighborhoods with no people around out there, with their eyes constantly on the streets. It was only diversity of houses, people, varied storefronts, and greenery that kept living and being used hand in hand that could make a real safe and comfortable city to live.

The book is available in two versions: English language 1992 reprint, and in Russian translation.

The Battle for Gotham: New York in the Shadow of Robert Moses and Jane Jacobs, 2010

Roberta Brandes Gratz was born and spent her early years in New York but her family had to resettle to the suburbs. Her greatest wish was to return to a big city as it offered plenty of diverse opportunities. The author started with this personal story and developed it to center on New York. She traced the changes in the city and the peculiarities of shaping its architectural environment in the post-war period in the 20 th century. She uses cases of constructions, demolitions of buildings and entire neighborhoods, of the early movement for memory sites protection and memory preservation laws, a.o.

Roberta Brandes was resettled under the urban renewal program led by Robert Moses, and Gratz shows how her story was in many ways similar to other half a million or the entire million resettled New-Yorkers. Since the 1960s, she has worked as a newspaper reporter, and similar to Jane Jacobs, described city life, lifestyles in different neighborhoods, and also covered urban renewal projects, among other things. Her articles and opinions, and engagement in public life in the city were the main sources for the book. The author also declared herself a follower of Jacobs. In her book, Roberta Brandes Gratz presented different stories and their historical contexts of the second half of the 20th century in New York.

Eventually, she concluded that only the residents themselves as users of the city could understand how it functioned, but not the experts who imposed their ideas from above in terms of "how it should be" and that Robert Moses’s policy was far more destructive than ever believed before.

A journalist by the first degree, and geographer by the second, Scott Larson, the author of this book, presented his thesis to the same topic at City University of New York in 2010. The book title implies the approach to urban planning in the period when Michael Bloomberg was the city mayor (2001-2013). His policy and that of his supporters in this field are the subject matter of the author’s research.

Larson set out with the analysis on how the perception of the stories about Jane Jacobs and Robert Moses and their ideas, as well as their ‘confrontation’ had changed since the 1950s. He explored how the stories remained topical still today, both in New York, and beyond. The author proved that Jacobs and Moses were virtually emblematic figures. Their ideas, and they themselves have constantly been present in the public discourse, while since 2001, especially after Jacob’s demise in 2006, there has emerged a new wave of refreshed interest. Academic monographs and reporter’s texts were written, exhibitions about their activities were organized, and their impact on New York, on a city at large, and on approaches to urban planning were (re)considered.

Thus, resorting to ideas of Moses and Jacobs is becoming a very important element of politician’s rhetoric. 2001-2013 is the time when after some period of slowdown in construction activities in New York, they resumed the urge for "grand projects" that Robert Moses used to promote. The author offers a detailed account of such projects as reconstruction of the Far West Side neighborhood for Summer Olympics that never took place, or Hudson Rail Yards in Manhattan, the largest developer project in the city since 1930s; or Atlantic Rail Yards in Brooklyn, as well as expansion of Columbia University campus in Harlem. He focused on illustrative rhetoric that government officials used in designing and promoting the projects. Scott Larson proved showed that key focus was on combining rather incompatible opposite ideas of Moses and Jacobs for the sake of getting public approval for the large urban projects.

Cities and the Wealth of Nations. Principles of Economic Life — it is the fourth book by Jane Jacobs. It is considered that the book was conceived to have the same big impact on economy as the "Life and Death of Great American Cities" had on urban planning. Jacobs started with the overview of classic economic theories and continued to reflect in line with her The Economy of Cities, denying the statement that key actors in macro-economy were great national states. Instead, she proved that individual cities were much more important.

Dark Age Ahead, 2004, was the last book by Jane Jacobs. Through the prism of the five pillars of the state, such as community and family, higher education, science, government, and culture, did the author criticize the policy of neo-liberalism, and proved that current developments in the USA would gradually lead the state to decline.