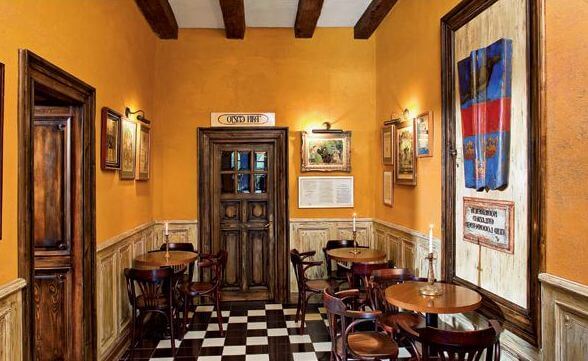 This event was part of the twelfth international conference "Lviv: City – Society – Culture" which was not limited only to an academic format but which invited participants to look at Lviv from the perspective of art and to hold a public dialogue with the creative circles of the city. The event brought together artists, painters, writers, and active members of society to reconsider Lviv’s spaces and reflected on their metamorphoses, continuity, and symbolism, continuity and rupture.

Four open space projects opened four conditional directions to move to the heart of Lviv’s space in terms of art, to weave into it history and modernity, reviving public memory with an emphasis on familiar subjects, urban facilities, the exteriors and interiors of buildings.

Artists invited Lvivians to light Famous Neons – to make neon signs on the walls of buildings, where at one time lived artists, whose influence on the development of the artistic process is not limited only to Lviv but which stretches across Europe. In this striking way, the project’s author Oleh Perkovsky invited participants to recall the work of the groups Shturm, Nova Heneratsia (New Generation), and Artes.

Andriy Boyarov experimented with the practices of "transferring" Lviv artists and cultural organizers, whose personal and creative life developed in Lviv, but whose centers of interest and professional communication reached beyond the city. The project 'Lviv and the Rest of the World: Travels, Meetings, and Classifying the Artistic Environment'  reflected our own experiences and personal views on Lviv’s famous figures.

Anna Kostyrko attempted to outline and locate the spaces where Lviv’s residents could had been in contact with works of art before WWI – during a time of a possible crisis of a certain understanding of art. Her project "Exhibition Space in Lviv 1913: An Attempt at Reconstruction" was based on archival research, but goes well beyond a simple summary.

Vlodko Kostyrko’s project "Miscja hromadskoho xarčuvannja, jak prostory pamjati" brought together a collection and remakes of interiors of Lviv’s cafes and restaurants. Many Lvivians see Vlodko Kostyrko’s projects every day when they visit their favorite cafes or restaurants, which were decorated by the artist. Meeting with the artist, participants were able to hear how he comes up with the conceptual ideas for the designs, how he implements them, and the artist’s trade secrets in embodying the spirit of Galicia in the interior. Vlodko says his projects are attempts to return the memory of the "people and places" as an alternative to the official history.