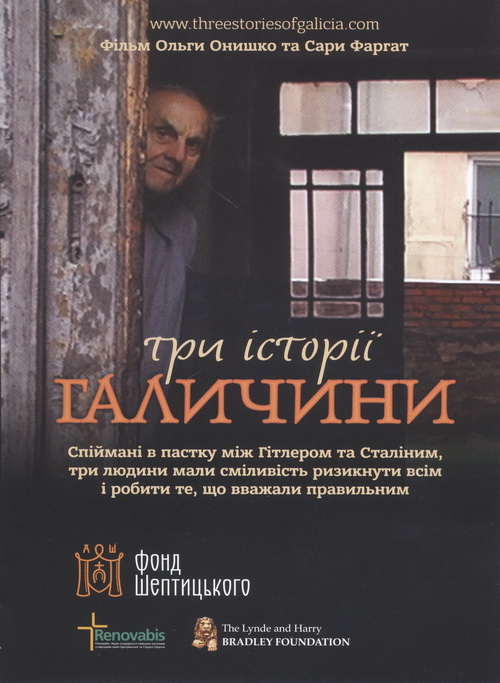 A screening of the documentary "Three Stories of Galicia" was held , followed by a meeting with Dr. Aharon Weiss.

The documentary "Three Stories of Galicia" (directed by Olha Onyshko and Sara Farhat) tells the story of the lives of three people during and following the Second World War. There is a Jewish man from Boryslav who was hidden by Polish and Ukrainian neighbors during the war. There is a Ukrainian woman, active in an underground movement which was persecuted by the soviet authorities following the war. There is a Polish, Roman Catholic priest from the nearby town Przemysl who, following the war, worked to preserve the Ukrainian and Jewish multicultural heritage of the region. Through the lives of these people is shown the complicated history of World War II, the Holocaust, the Ukrainian movement, and relations between Ukrainians, Poles, and Jews living in Galicia.

Following the viewing a discussion of the film was held with Dr. Aharon Weiss, the lead character of the first section of the film. Weiss and his family were kept hidden by two women – one Ukrainian and one Polish – during the war. Weiss left Poland for Israel following the war where he became a historian, and worked at the Yad Vashem World Center for Holocaust Research and Education. Currently, Dr. Weiss is a collaborator in the international organization known as Joint, and visits Ukraine often on official as well as private trips, working to strengthen Ukrainian-Israeli cultural and educational relations.

The discussion with Dr. Weiss ranged from topics of human relationships under extraordinary circumstances, suffering and survival, private disputes between parents and children, complicated Polish-Jewish-Ukrainian relations and the vestiges of the inter-war period, World War II, and their acknowledgment and depiction in the contemporary academic and public discourse.

The discussion was led by Vasyl Rasevych, historical consultant for the documentary, and senior research fellow of Ukrainian Studies at the Krypyakevych Ukrainian National Academy of Sciences, specializing in Galician History of the Austrian period and the politics of memory in modern-day Ukraine.