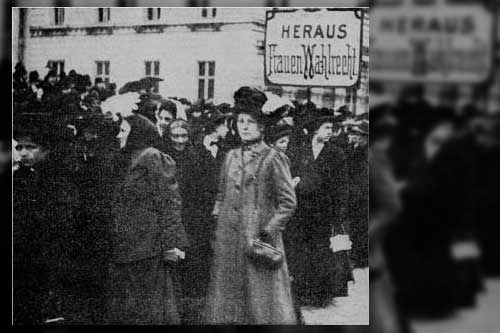 The 100th year anniversary of international women's day; this is history. Her history is your history – our history.

The festival aimed to help consolidate of international women's movement, ensure the development of discussions on the rights and roles of women in Ukrainian society, and to draw the attention of a broad spectrum of citizens to issues surrounding social and economic security for women.

The following events were held during the festival:

- the screening of feature length films that reveal a segment of feminist history, and illustrate an alternative view of the role of women in society. Iron Jawed Angels and I Shot Andy Warhol  are based on real events and explain women who, in their time, changed the course of world history.  Sally Potter's Orlando, an adaptation of the original written by British feminist Virginia Wolf, deserves specific attention;

- a photo exhibit, that unites the efforts of the creators of Photopicture and Skin. This exhibit is dedicated to issues of women's beauty and exploring new visions through feelings and pictures;

- the presentation of Gender Museum – the only museum in Ukraine dedicated to womanhood and the women's movement;

-  as well as lectures, discussions and special classes.

Admission was free for all events

Organizers: independent initiative group of artists, journalists, and educators from Ukraine and Poland.

Сover Image: Demonstration for universal suffrage and the right to vote for women, held on March 19, 1911 in Vienna / Collection of the Austrian National Library