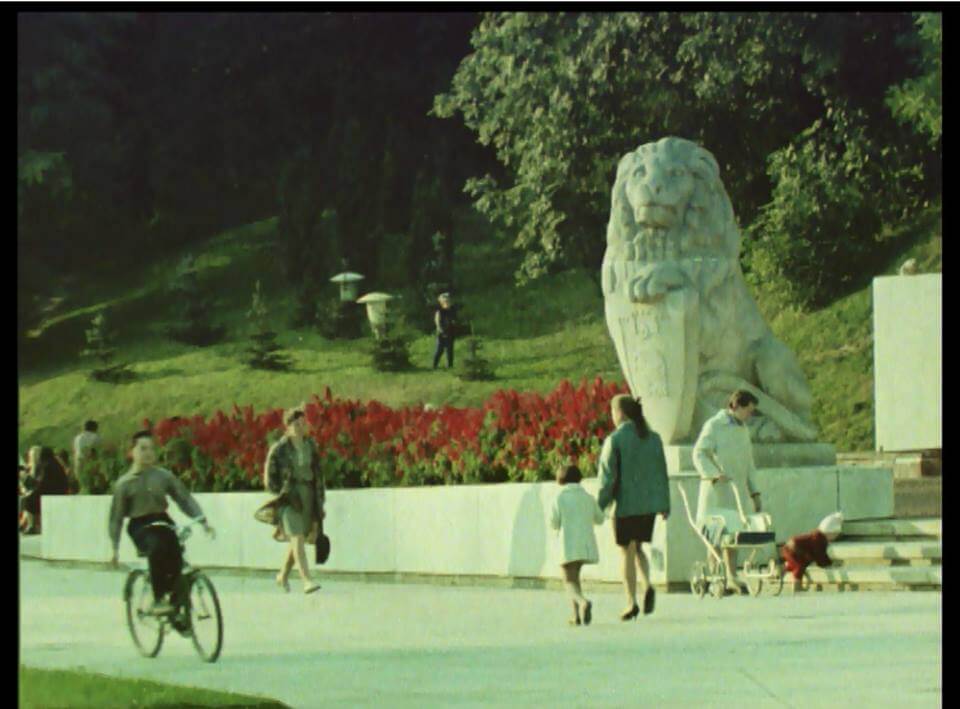 Urban Media Archive launches a series of public presentations of materials [un]Archiving from its collections to promote ideas connected with archival heritage and introduce new non-academic forms of talking about the past.

The series of presentations will launch within the festivities for the Lviv City Day on May. For the occasion, we offer to watch two films about Lviv digitized from the cinefilm in archives. The two screenings will take place on May, 5, at 9 pm, in the open – at Muzeyna square, and simultaneously in the Bohdan Khmelnytskyi Park of Culture and Leisure, and the "Horikhovyi Hai" (Hazel Grove) park.

The first film "A Good Day of Lviv" was made by Volodymyr Shevchenko and a Kyiv film studio Ukrkinokhronika in 1969. According to the director’s idea, the film shows the city through the images of work and leisure of Lviv citizens. An important element of the film is music accompanying the visual imagery of the movie. It is a jazz experimental improvisation suggested by a young musician and composer Mykhaylo Manuliak.

Unlike the color look from the capital, the second film was made on the Lviv television studio. The black and white film of the "Song Above Lviv" is the last musical film directed by Oleksandr Herynovych. It was made in the next year, 1970. The music typical for that time is also an indispensable element in the film. Along with the glorification of achievements of Lviv through the socialist work, a romantic image of the city is a prevailing aspect of the film.

The event is organized jointly with the Department for Development of the Office for Culture of Lviv City Council.

[un]Archiving– these are informal exhibitions of sets and collections from the Urban Media Archive aimed to promote and highlight the problems of archival heritage for the general public. We are trying to develop new attitudes towards archiving and present historical collections in an uncommon perspective. The events within the series include joint screenings and sessions of visual, audiovisual or audio pieces as a form of free reflection and discussions different from academic style that combine popular formats and archival historical collections. It will be the soirees of cine-music or photo-music, film screenings, photo presentations, and other events showing the dialogue among the present and the past.

In 1969, the authorities of the Lviv city intended to commemorate the 30th anniversary of connecting the Western Ukrainian lands to the USSR. The Lviv regional party committee adopted a decision to place an order for a film to promote the achievements of the city in the Soviet time. The officials requested the Kyiv film studio Ukrkinokhronika producing documentaries and films about Lviv and specialized in producing newsreels. Volodymyr Shevchenko has been a correspondent of Ukrkinokhronika in Lviv for a long time. Later, he became a prominent film director and cameraman who was filming the disaster at the Chornobyl nuclear power plant in 1986 and died therefore. Shevchenko suggested an interesting idea to show Lviv through the lens of work and leisure. The film was supposed to have two parts each of them showing Soviet enterprises of Lviv, and leisure activities of the employees of the plants. Shevchenko had abundant visual imagery of the city showing model enterprises and beautiful images of citizens. Text and music were missing. They invited Mykola Vinhranovskyi who used to work at Dovzhenko film studio and was experienced in combining different genres of art. However, his poems seemed too "liberal" to the authors of the film and they had to substitute the poet for Roman Lubkivskyi, a more reliable Lviv author. The most interesting peculiarity of the film, in addition to great shots and Lubkivskyi poetry, was the music of a young jazz performer and composer Mykhaylo Manuliak. He was invited to the film studio to Kyiv. Viewing the available imagery, the musician and the colleagues composed a jazz piece engaging a vibraphone, the only instrument of the kind at the time in Lviv. The music to the film was composed directly at the film studio. It is characterized by a virtuoso and fresh interpretation of the rhythmic row and is associated with the images the viewers see. It was a peculiar sample of screen music when a performer improvises depending on the change of imagery. The film resulted to be light and not overburdened with any ideological postulates. It was screened in all cinemas in the city, and gained popularity among citizens. Mykhaylo Manuliak was invited to Lviv philharmonics to establish a band he called the Vatra (Flame).

A 40 minutes long black and white film by the Lviv television aimed to show the best artistic capacity of the city at its peak. It was the last work of Oleksandr Herynovych with music films. He was one of the founders of artistic broadcasting at Lviv TV studio. Besides, the film was the last work of Oksana Palamarchuk who worked at the studio since 1957, and was dismissed from the editor’s position supposedly for the "nationalist abuse." After the successful films of 1968 ("The Philanderers") and of 1969 ("May We Have Heavy Crop"), the Lviv TV studio editors produced a film presenting Lviv through the lens of its socialist poetry and music. Young people, the new graduates from Lviv universities, go to the High Castle mount to say good-bye to the city. Next, they follow to different cities all over the Soviet Union to build socialism and the ‘grand future.’ Each song or dance in the film were supposed to be either linked to urban topography, or reflect the achievements of Lviv. However, eventually, a romantic theme prevails with the songs about love and emotions. The works presented in the film were composed by R.Bratun, M.Skoryk, M.Petrenko, K.Sokolov, A.Kos-Anatolskyi, B.Stelmakh, B.Yurkiv, S.Pushyk, B.Yanivskyi, a.o. The film screened young singers I.Popovych, O.Shcherbakova, L.Borovets, V.Shumlianska, M.Kempa, M.Tsiupak; and a famous dancer O.Chepuruk, as well as the amateur groups "Rosynka" and "Druzhba". Some Lviv authors even composed a song for the film about football game where the local football team "Karpaty" would win, not lose!