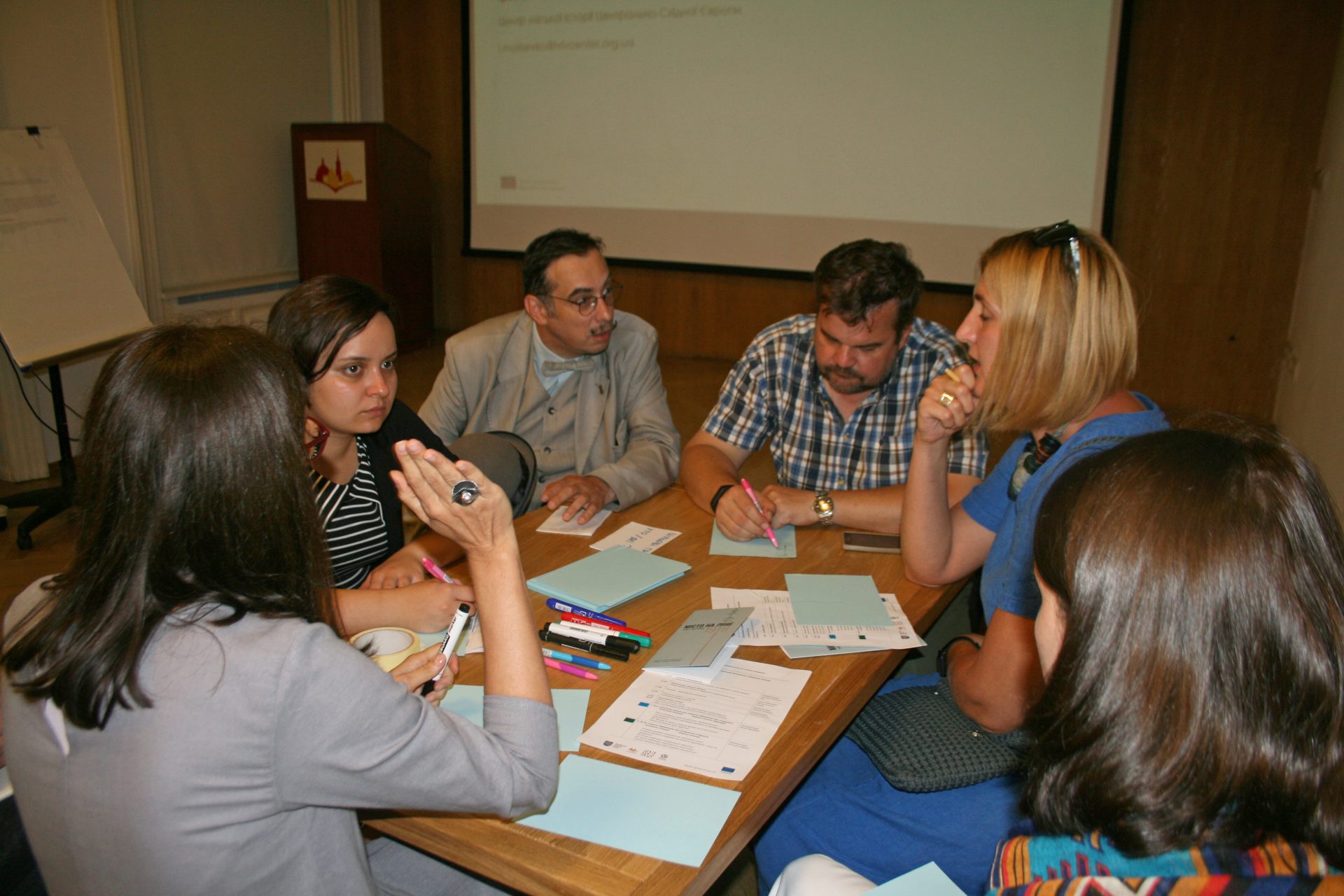 The practical program "Development and Piloting of Materials for Tour Guides on Contested Topics of the Shared History of Lviv" is developed as part of the project "ReHERIT: Common Responsibility for the Shared Heritage." The project intends to develop new approaches and tools to address cultural heritage of Lviv and Uman, and to contribute to the rethinking of multicultural heritage of the cities. The program for the guides aims at expanding their competences working with contested topics of the multicultural past of Lviv, with conflicting themes of different historical memories, and their contemporary interpretations. The program includes several stages: development of materials by a group of experts and tour guides; holding a workshop to test the materials; conducting pilot tours (excursions) based on the developed materials; and having regular city walks by Lviv tour guides with the program materials. All activities are planned to be implemented from September 2018, till July 2020.

The role of guides is peculiar and extremely important to create the inclusive public space for local heritage. On the one hand, contacts between visitors and local communities open new opportunities for intercultural communication. On the other hand, they might lead to misunderstanding and deepen the available symbolic conflicts. It is not infrequent that the source of the conflicts comes from the divided historical memory. Tour guides would often act as mediators in these processes, since the dynamic development of tourism results into interaction between the representatives of various cultural environments. Therefore, tour guides not only represent a historical and contemporary image of the city for visitors, but also act as agents for the everyday cultural diplomacy in communicating with various audiences.

Lviv as a center for tourism in Ukraine and a culturally relevant city for Polish, Jewish, and Ukrainian history has huge potential of cultural heritage for inclusive and sustainable local development. In order to have different actors of multicultural heritage successfully and transparently cooperate, it is important to overcome the available prejudices and divides. It is very often the case that the processes are hindered by the conflicting memory of the past when different interpretations of the same events coexist and are taken as mutually exclusive, whereas the “characters” of the same group are perceived as the “perpetrators’ for the other, and vice versa. In particular, the subject of the Second World War is perused as a tool for mobilization in present-day conflicts, such as military, political, and symbolic. The event that took away millions of lives is deeply rooted on the level of personal and family memory. At the same time, it became a touchstone for Soviet ideology, and also a central heroic martyrological narrative of new nation building efforts after the collapse of the Soviet Union. Varied versions of historical memory would often function as colliding sacral myths, with a complicated discussion between them. The lens of local perspective allows taking a look on the contested history and the traumatic memory beyond the boundaries of personal, national, and ideological framework.

The materials designed for the workshop “Contested Chapters of the Shared History: Telling About the Second World War in Lviv” are divided into 5 subtopics, such as Soviet occupation, collaboration and cooperation, topography of the Holocaust, behavioral models of civilians, and the end of war. The authors focus on Lviv and suggest considering the contested issues of conflicting memories about the war through local and transnational approach that includes the multiplicity of narratives and problematizing of the available terminology describing the events. The approach allows undermining the stereotypes impeding the dialogue around the traumatic chapters of the past. The materials will focus on the complicated dynamics of local and global processes, and encourage individual rethinking of history of the Second World War to have it discussed with different audiences.

The materials will be available in two formats – that of the online maps for the sites and spaces related to the WW2 in Lviv, and the readers. They will be uploaded on the Portal of cultural heritage of the ReHerit project, and on the online platform of the Lviv Interactive project. Each subtopic will have a reader with a set of academic texts and source materials on the Second World War in Lviv and further in East Europe.

The developed program will be tested at the workshop for tour guides on March, 6-7, 2019. The workshop invites to discussion and work on the materials that the tour guides could use in their routines. During the workshop, there will be a presentation of materials, group work with individual topics, lectures and talks with researchers dealing with the most contested aspects of the Second World War, as well as the training on dialogue as a tool to address conflicting memories. The workshop will come out with individual projects of the walks developed by the city guides on the basis of the suggested materials.

The materials were developed by

Olena Andronatiy -  a city guide, researcher of the history of Galician Jews, participant and organizer of expedition trips in Ukraine and in Poland to describe the remains of Jewish cemeteries, a teacher of Jewish history and traditions in international projects for teenagers.

More on the project "ReHERIT: Common Responsibility for Shared Heritage"

Since summer 2018, Center for Urban History and partners launched a two-year-long project "ReHERIT: Common Responsibility for Shared Heritage" implemented in Lviv and Uman. The project intends to raise awareness about local contexts, about the versatile and understudied capacity of heritage; to enhance competencies and creation of new approaches and models for effective cooperation between different actors dealing with heritage; to actualize the understanding of heritage due to analysis of available infrastructure for culture, tourism, and business, engaging various heritage agents and local communities; to study the opportunities to improve heritage management and its promotion, to implement best interregional and international practices. The ReHERIT project will last from late July 2018, until late July 2020, and incorporate a sociological, infrastructure, educational methodological, and practical activities. The project outcomes will posted on the Porta for Cultural Heritage and available for anyone interested. The project provides for creating the online resource “Portal for Cultural Heritage” (Heritage Hub) to post information and materials for experts in cultural heritage. The ReHERIT project is implemented jointly with the Department for Preservation of Historical Environment of Lviv City Council, Center for Urban History, Urban Space Lab, and the Office for Culture of Uman City Council.

The project is funded by the European Union.