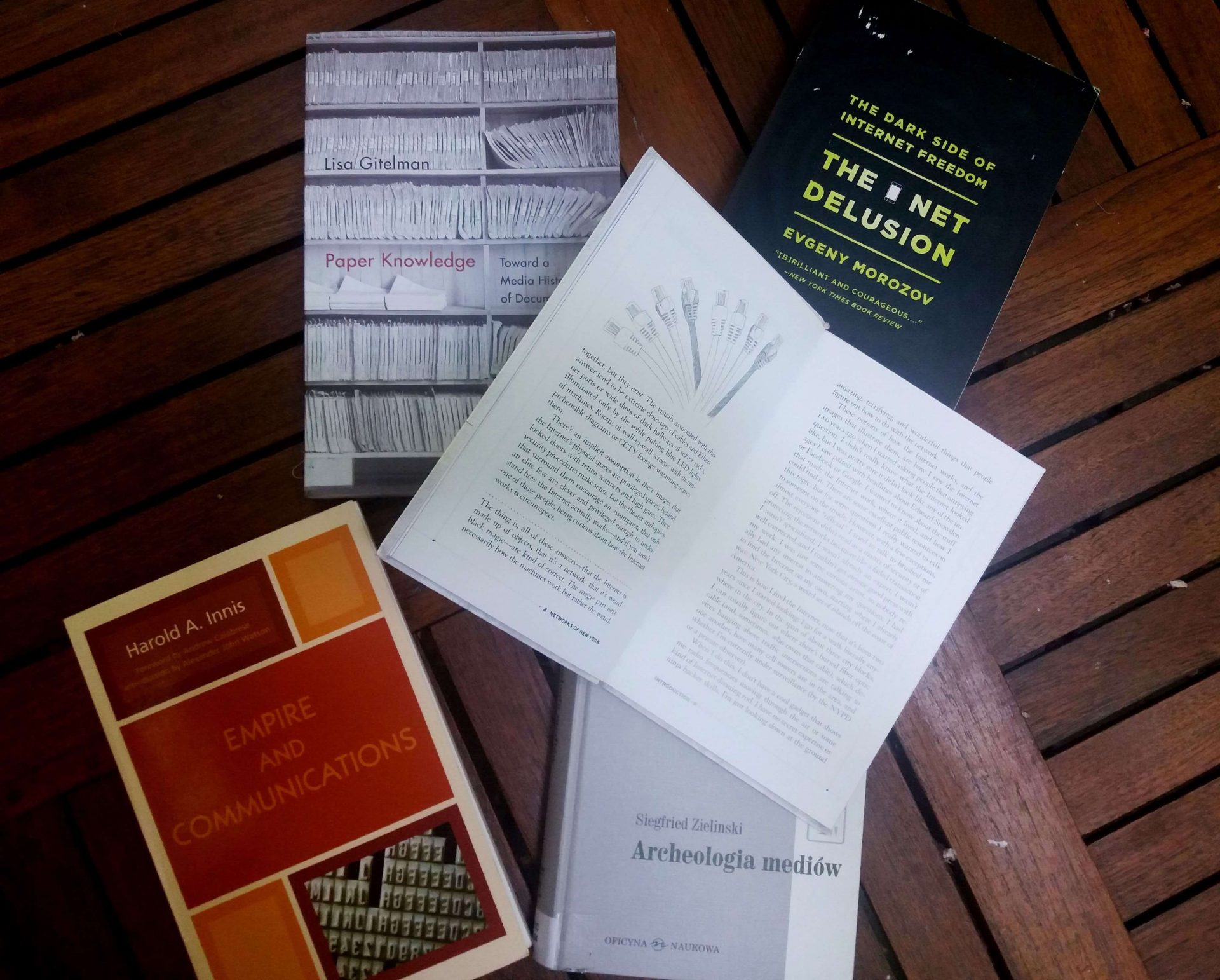 We offer to library users a brief overview of books on the history of communications, the role of media in social relations, archeology of media, and the studies of mediacity.

The book "Empire and Communications" by a Canadian economist and sociologist Harold Innis is one of the first to launch the synthesis of the study of communications and social order. In the series of Oxford lectures, published as a monograph in 1950, Innis talks about communications within the paradigm of technological determinism, according to which social practices revolve around technological and economic basis.

Innis traces in the media the essence of communication, as the effectiveness of communications is key to organize large areas. The means and ways of communication are presented by the researcher as integrated into the system of power and social practices, while he believes temporal-spatial aspects determining the point of civilization to be related with media. The media that add expressiveness to the temporal dimension (such as parchment, clay, rock) lead to a larger centralization of empires and less complicated structure of the chain of authority. Instead, those focusing on space (such as papyrus or paper) facilitate decentralization, requiring a more complicated chain of authority. That is why a view on the empire allows seeing how effective different kinds of communication turned out to be. Innis suggests a macro approach to empires, social structures and control over knowledge in civilizations, from Egypt, Babylon, through oral tradition in Ancient Greece and written tradition in Roman Empire, to paper-based tradition and the effect of printing in Western Europe in the early modern period. The work has become classic and widely quoted. It had a significant impact on other theoreticians of media, such as Marshall McLuhan, and laid the foundation of determinism of media as one of the key discourses in the study of theory and history of communication.

In his book, "The Net Delusion: The Dark Side of Internet Freedom", a Belarus researcher Yevheniy Morozov also studies the role of communication in the context of relations of power. On the other hand, he opts for a narrower focus and largely departs from the ideas of technological determinism. Yevheniy Morozov criticizes Internet-centrism and cyber utopian attitude common for western democracies of the 2000s. Morozov compares changes of public orders in East and Central Europe of the late 1980s and a number of social protests of the late 2000s, and therefore suggests his own perspective on the system of power and the role of Internet within the system. Morozov is critical about a statement that Internet was the driver of Arab revolutions and offers arguments to undermine the position about the internet as a democratization driver in societies. In this book, and also in his next book, "To Save Everything, Click Here: The Folly of Technological Solutionism", Morozov enlarges on the criticism of what he terms as ‘technological solutionism.’ It is a belief that digital technologies and the Internet can per se bring universal solutions to social problems. To oppose the cyber utopia, he suggests examples of adaptation of authoritarian political systems and effective use of Internet technologies to increase control and repression of human rights.

The book by a historian of media Lisa Gitelman "Paper Knowledge: Toward a Media History of Documents" is also largely undermining the categorization of classic theories of communication. In her essays, the author is trying to find the answer to the question of what a document is. The subject under exploration had been chosen for several reasons. Primarily, a document is deeply integrated into the way of thinking and into life of people. A document as a phenomenon lasts longer than printing, paper, or literacy. Thus, the author believes it unnatural to apply the classification from classic theories, such as the term of a Canadian theoretician Marshall McLuhan ‘print culture.’ According to Gitelman, no media technology has had any logics throughout its existence. In particular, the term ‘print’ has gone far beyond the original definition of printing technology. Instead, certain consistency can be traced in the media genres irrespective of the technology employed (such as in documents). Therefore, the approach Gitelman uses to study the history of media implies the choice of the most represented genre of media in the life of a person and the recording of its history through the prism of different technologies with the focus on social models entailed. It makes this study perfectly fit into the domain of media archeology.

One of the most substantial proposals to define the notion of ‘media archeology’ (if the area’s supporters aim at developing any definition at all) is contained in the book by a German theoretician of media Siegfried Zielinski "Archeologia Mediów" (available in Polish in the library of the Center for Urban History). Archeology of media is distinguished from the archeology of knowledge and implies a view on the structure through something which is not part of this structure, or defines its boundaries. It allows refusing from the discourse firmly accepted in the history of media about the linear technological progress and focus on the ideas that had been rejected. You can find in the forgotten non-mainstream inventions no less interesting options for the development of technologies. Nevertheless, the failures shall be treated as another contribution to success stories. Undermining understanding technologies as a linear process will lead to its criticism as a main scientific approach in the sciences on media, while, at the same time, to rejecting the right of any area to prevail.

Hence, researchers working in the area of archeology of media largely reject introduction of distinct boundaries, methods, or definitions of what the archeology of media is about. That is why Zielinski uses the concept of anarcheology of media. This way, archeologists of media have the permanent field for interpretations. However, their position becomes very loose. Siegfried Zielinski finds it relevant to study the ideas that are in the margins of technologies, with a view to today’s situation. He claims looseness and uncertainty to be the main preconditions for experimenting. Without them, the experiment ‘comes down to a regular testing of the earlier defined regularities.’

In his work, Siegfried Zielinski traces the evolution of thought as to a visual and acoustical in ancient scholars through the texts of Jesuit monks, inventors of the early modern period until the futurists of the Soviet Union. On the basis of the materials processed, the author concludes the concept of deep time. The analogy is borrowed from geology. The science of subsoil resources had a scientific discovery when they found the layers that were much deeper than the surface layers of granite that had overlapped and eroded to come out to the surface. It gave a reason to claim that along with the linear layers, there are also other, much older and powerful geologic stratifications on the surface of the planet. The discovery was termed ‘deep time’. In fact, Zielinski uses it to describe media that made the ground for the present-day technologies.

One of the new arrivals in the library, is the book "Networks of New York: An Illustrated Field Guide to Urban Internet Infrastructure" by Ingrid Barrington. The work can be seen as an example of employing the ideas of media archeology ‘in the field.’ The author studies the Internet in a multimillion metropolis through its material nature and physical presence in the cityscape. Ingrid Barrington studied the ways of laying and functioning of city cables, the methods of installing radio antennas, and types of engineering signs. It resulted into an illustrated guidebook. In addition to practical navigation, it is also a source for theoretical approach to a media city where there are delineated technological, economic, and social factors related to the available infrastructure. For instance, today, the Internet networks of New York repeat the routes of laying telephone cables that are also overlapping with the old telegraph networks. It implies continuity and overlaying of previous technologies in developing a media city. Since the technology is not possible to separate from economy, behind the specific cables and antennas in the Barrington’s guidebook, there are competition and disputes of Internet providers. At the same time, the ways of development for Internet networks are regulated and stipulated by various laws and discussions around the issues of privacy and security. Such as, the Internet network of New York police is designed for one of the largest video surveillance systems of the kind. We can notice urban infrastructure only when it stops functioning. At the same time, according to Ingrid Barrington, this usually invisible infrastructure shapes and changes our everyday life on a regular basis.