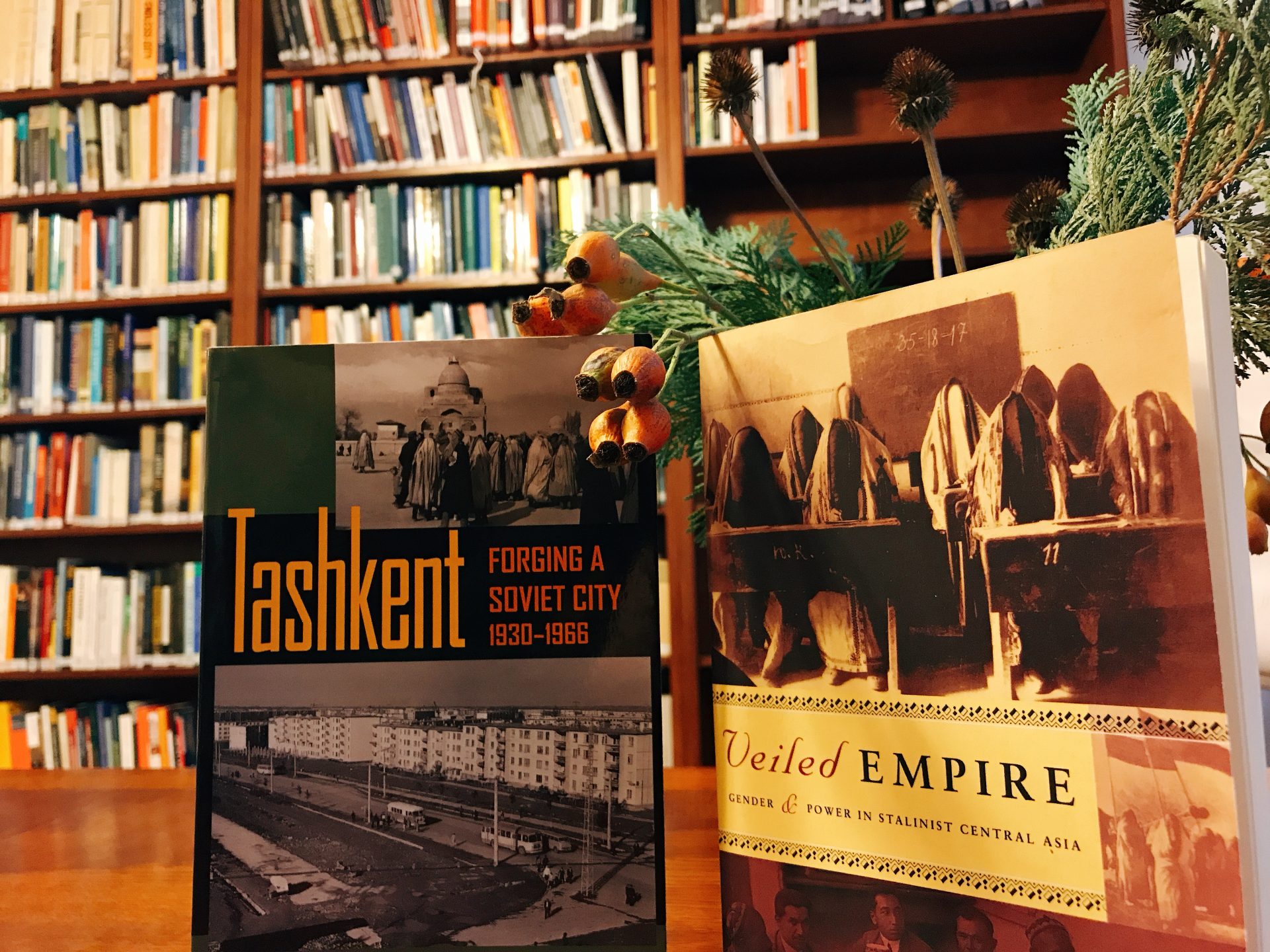 The two books in the Center's Library could serve a great contribution to the field of Central Asian Studies, Urbanism, Orientalism, and Gender Studies. These offer complex and often overlooked perspectives of the shifting power dynamics in Soviet Uzbekistan and the region. The studies are based on thorough archival research of both Russian and Uzbek language sources, illustrating the gaps between Soviet visions, propaganda and the realities that were formed through unforeseen reactions of different social groups to Soviet policies in Soviet Uzbekistan. The authors underline byt, as the epicenter of the Soviet project in the Central Asian countries. It is particularly manifested in first, the existential space of a ‘modernized Uzbek’ and second in a ‘liberated’ image of an Uzbek woman. Both processes are presented as relying on essentialist, orientalist and uninformed positions of the state authorities in relation to local traditions and daily life. The books identify how the use of formal and decontextualized traits served to present and enforce the imagined nation of Uzbeks throughout Soviet history. Both perspectives, also contribute to the understanding of the Central Asian context as a whole, as Uzbekistan and especially Tashkent provides "models" of showcasing the path of progress that was set by Bolsheviks for other republics and the colonial world.

Tashkent: Forging a Soviet City, 1930–1966 by Paul Stronski
He engages in an extended period of Soviet urbanization in Central Asia, which allows indicating important changes as well as continuities of forging Soviet Tashkent in urban planning and architecture. Following a chronology, Stronski analyses different approaches to Soviet Tashkent, from nearly colonial early approaches to the inter-war years and the aftermath. The war, a massive earthquake of 1966, in particular, reoriented the destiny of the city. With a mass influx of people, institutions and heavy industries that were evacuated to the city, the urban structure was changed beyond many original plans. The work approaches multiple perspectives, including the place and the role of "nativization", where despite its promise to bring Uzbek people to the process of creating the "modernized" city, in reality, they had little say in what was planned. Despite the large concentration of urban planning institutions in the city, the ones, making key decisions were rarely Uzbek or even closely acquainted with the local context. Similarly, despite attempts of providing mass housing that would suit local climatic circumstances and the idea of a new Soviet person, Soviet Uzbeks were not the main receivers of the new homes. Many adhered to more known and traditional homes in mahalla neighborhoods, sometimes willingly, to save the existing social networks. The role of women and the overall reordering of social relations in the urban space is also explored and illustrates how formal liberation resulted in a disturbing two-sided role of women in public and private space, where stakhanovites female heroes were facing an increased stigma at homes and incomplete freedoms in public. The educational system, hygiene, and medicine were dictating Soviet urban policies as well. After all, the urban space was the main upbringing mechanism of the new Soviet man and woman, with new Soviet values and lifestyles. The disparity between official utopian vision and on the groud lack of good coordination and management makes the story of forging Soviet Tashkent is not only about the dominance of Soviet administration, but also about negotiations, counterbalancing and active protests.

Veiled Empire: Gender and Power in Stalinist Central Asia written by Douglas Northrop, Cornell University Press, 2004 (1st edition) is a comprehensive study of Bolshevik policies in the early Soviet Uzbekistan of 1920-1940s, where the thesis is centered around the policy against women seclusion and the veil, which became known as "The Assault" (hujum) of 1927 and then took off as the national policy for gender equality up till the 1950s. The policy entailed Uzbek women giving up paranji and chachvon and embracing a more Soviet outlook. The author comes up with a study of various Uzbek and Russian sources, which arrive at an overarching argument of the intrusive, yet illusory attempt of building a Soviet image of an Uzbek woman. The creation of the surrogate-proletariat of the Stalinist regime and thus, crucial leverage at moving forward to the communist future, remains a vision. The abolishment of the veil is never fully exercised and initiates reinforcement of existing resistance of Islamic patriarchy and extremism. It has rather contingent consequences on the extended social meanings. Religious, class and gender conflict is explored in the context of Soviet authorities trying to build support among Uzbek people. Northrop elaborates on the official state rhetoric and reasoning. Importantly, the author engages with the topic, as crucial to Soviet foreign representation of an anti-colonial power. By focusing on hujum campaign in Central Asia, Soviet administration was accommodating features that were both, paradoxically different and equally similar to European colonialism. The liberation of women and strive for gender equality in more areas of life was also a fight against the perceived backwardness of Uzbek Muslim society.

Please, be reminded that the library operates from Monday to Thursday, from 10 am to 6 pm, and from 10 am to 5 pm on Friday. Welcome!