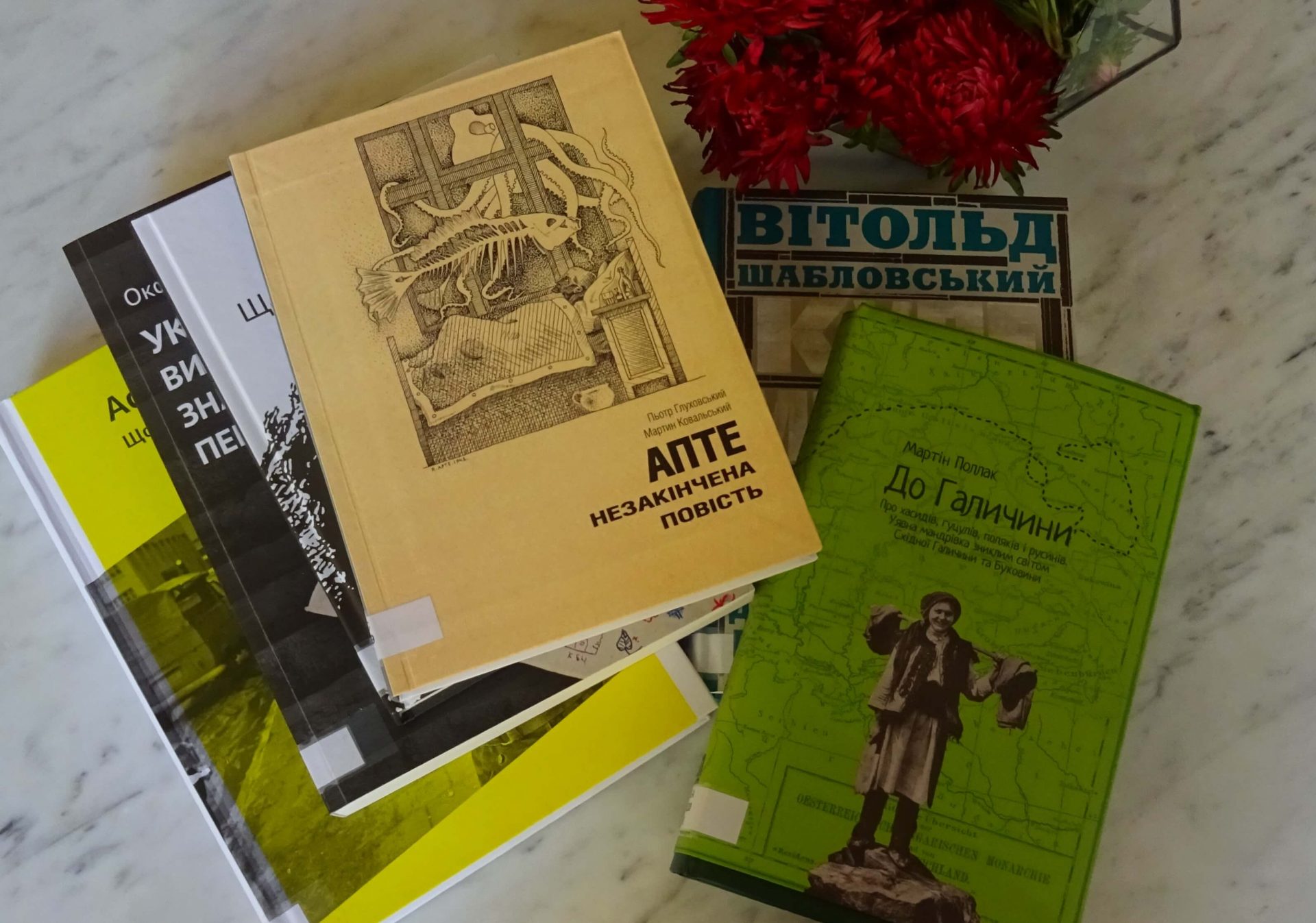 In September, the library at the Center for Urban History received new books, such as historical pieces, feature stories, memories, art albums and children books. This text offers an overview of new books on contested past recreated through personal stories.

The first book is the one by Martin Pollack "Towards Galicia. On Hasids, Gutsuls, Poles, and Ruthenians. Imaginary Trip Along the Perished World of East Galicia and Bukovyna" means to destroy the romanticized stereotypes or nostalgic perceptions on the life of Galicians during the imperial period. Working with literary sources, memories, old newspapers and photographs, Pollack was trying to show cities and people of East Galicia and Bukovyna as they appeared to their contemporaries over 100 years ago. In the foreword to the Ukrainian translation, the author tells about his step-father who had been in the army during the First World War on the area of the present-day Western Ukraine. In his recollections, Galicia has forever remained "a landscape of horror and fear, a gloomy metaphor of war" engulfed by poverty, neglect, and corruption. According to Martin Pollack, the stories evoked with him certain interest to Galicia long before he could travel here. Thus, the book was founded on quite diverse excerpts from literary pieces and memories of Ukrainian, Polish, or Austrian authors.

A book by a Polish reporter Witold Szabłowski "Guns and Cherries. Stories of Good People from Volynia" tells about the people who were saving Poles during the 1943 massacre. The book is based on testimonies of "Ukrainians from Volynia and Volynians from Poland" collected by the author over the last three years. Event though Szabłowski admits the controversy of some memories, he attempts to offer the space for voices of his interviewees and let them sound beyond the field of political debate. According to the writer, he is not trying to find the reasons for the disaster at Volynia in the book, or point out the perpetrators. Presenting the people who used to save their neighbours, either friends or strangers, he is searching for a "bridge between Poles and Ukrainians" and a hope for a dialogue about the shared traumatic past.

A personal story in the middle of hard times is the focus of another book, the "Diaries of War Time" by Astrid Lindgren. It is a perspective on the war taken by a citizen of a neutral Sweden. At the same time, there are also fears, sharp statements, and annoying emotions. Along with the updates on the course of war, scraps from newspapers and ideas of the prospective writer about the fate of Europe, we can find personal drama of the author, concerns over some family or everyday problems. Despite political bias, Lindgren refuses to treat the war as part of her usual everyday life.

A different depiction of the war images can be seen in the book "Without Anger, Without Hate. Etty Hillesum’s Diary, 1941–1943." Esther, or Etty Hillesum lived in Amsterdam at the start of war. In 1942, she volunteered in the Westerbork concentration camp to help the severely ill people. Next year, Esther and her family were imprisoned and deported to Auschwitz, where they were killed. In her diary, Etty describes her feelings and hopes that remain to be life-affirming despite the surrounding violence. She tries to see and keep humane attitude in the midst of the Holocaust horrors, and believes that one could manage to have the "soul unimpaired."

Ukrainian translation of the Etty Hillesum Diary is one of the last translations in the long list of above 90 translated languages. In the author’s country, the Netherlands, the diaries and letters by the author have been republished 28 times.

The book by Polish writers Piotr Gluchowski and Martyn Kowalski "Apte. The Unfinished Story" tells a story about the life of a Jewish young man Richard Apte. Together with his parents, he was hiding during the Nazi occupation in the Cracow ghetto. The story of the Apte family came to be known discovered due to a notebook with Richard’s drawings randomly discovered at one of the attics in Wieliczka in 2009. The authors of the book do not claim any historical truth, but try to reproduce the last four years of the young man’s life and decipher his view on the circumstances his family had to face.

A new book by Oksana Kis "Ukrainians in GULAG: to Survive Means to Win" is based on stories, letters, and memories of women who had had experience of political imprisonment in camps and prisons of GULAG in 1940—1950s. in total, the monograph includes memories of 120 women, mostly originating from Western Ukraine.

The book describes the conditions for prisoners and their attempts to change their everyday routines, leisure, and religious practices, identity and femininity, corporality and sexuality behind the bars. A separate chapter is about theoretical grounds of feminist studies to research female historical experience.

Traumatic experiences including unbearable conditions of stay, physical violence, dehumanization, and humiliation are opposed to attempts to preserve human face, dignity, and solidarity. According to the author, the book is about invisible female capacity.