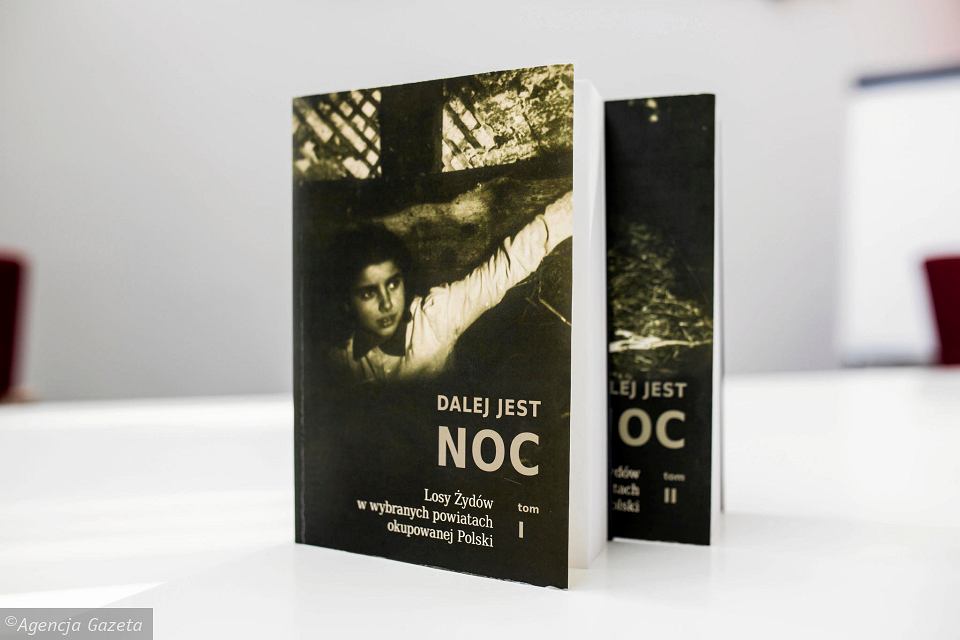 Book Review on the Holocaust in Poland

Discussions about the official memory policy on the Holocaust in present-day Poland attract media’s attention and provoke heated debate at social forums, both in the country, and internationally. At the same time, it is important to view them in the context of long-term and comprehensive research conducted in Polish institutions. A number of Polish authors, mostly from the milieu established around the Center for Holocaust Research at the Polish Academy of Sciences, tackle the academic exploration of this traumatic subject. Publications, both academic and publicist in nature, would often provoke lively discussion and encourage a complicated but important rethinking of the past.

A two-volume edition of "Dalej jest noc. Losy Żydów w wybranych powiatach okupowanej Polski" edited by Jan Grabowski and Barbara Engelking is the result of the five years of work of nine expert researchers who studied the Holocaust process in nine individual poviates. Since the territorial framework of the project covered the area of the interwar Poland, one of the published texts might present specific interest to Ukrainian readers as it is about the events in Zolochiv poviate (part of present-day Lviv region). The editors’ board declared a micro-historical approach as the one that is best adaptable to the Holocaust research on a local scale, and they tried to follow the line. The book pays special attention to survival strategies of Jews who managed to escape during the liquidations in the ghettos and deportations to the Nazi concentration camps. Their further life largely depended on local non-Jewish population and the attitudes of the "neighbours", such as police officers, fire fighters, foresters, resistance movement participants, and common village people. Much focus is on case studies presented by the authors. They point out to the wide range of possible scenarios, sometimes rather unpredictable, and to their changing nature. It must be noted that the Polish media witnessed public discussions on this book long before its official presentation, and they have been active for several months already.

Another two-volume edition "Pod klątwą. Społeczny portret pogromu kieleckiego" can be defined as an artful anthropological reconstruction made by Joanna Tokarska-Bakir of the pogrom in Kielce in 1946. It is by far the largest scale case of anti-Jewish violence in the post-war Europe. The book describes the course of the pogrom, but also a broader social context around it. Among other things, the author tries to trace the mechanisms of mobilization of Kielce pogrom perpetrators, according to how they explained their acts after being brought accountable, which attitudes prevailed among those who "merely" observed everything, including also the representatives of various authorities. Tokarska-Bakir added to her research an extensive volume of documents, mostly testimonies of victims, eye-witnesses, and perpetrators documented during the pogrom investigation.

The book by Jacek Leociak "Biografie ulic. O żydowskich ulicach Warszawy: od narodzin po Zagładę" is a sort of guidebook along the twelve streets of the capital that were densely populated by the Jews, and were included into Warsaw ghetto territory during the German occupation. The story about each of the streets consists of three parts – "History", "Ghetto Times", and the "Epilogue". It presents the pages of life, death, resistance, survival, forgetting, and bringing back the memory about Jewish Warsaw. The book is well illustrated, it has many photos, fragments of maps and aerial views of the Second World War period, which brings the reading process to a level of a time travel.

Finally, the "Sendlerowa. W ukryciu", a book by Anna Bikont, a journalist with a background in psychology. It stands out among other books from this review. Firstly, it is rather a publicist book, even though it was written on the basis of a extensive sources, such as materials from private archives. Secondly, the book is dedicated to a biography of one person only, but a very meaningful personality for a Polish narrative on the WW2, a Righteous of the World – Irena Sendler. Bikont intertwined the story of her engagement in the rescue of Warsaw Jews into a network of social relations between the rescuers and the persons they helped. Their relations would often be rather complicated and unfitting into the framework of established historiographic canons. Another storyline is about Sendler and Polish authorities, and the changes in attitudes therein (from suspicions to attempts of instrumentalization) towards her and her supporters, and about their adjusting to life in the post-war Polish reality overflowing with anti-Semitism, among other things.