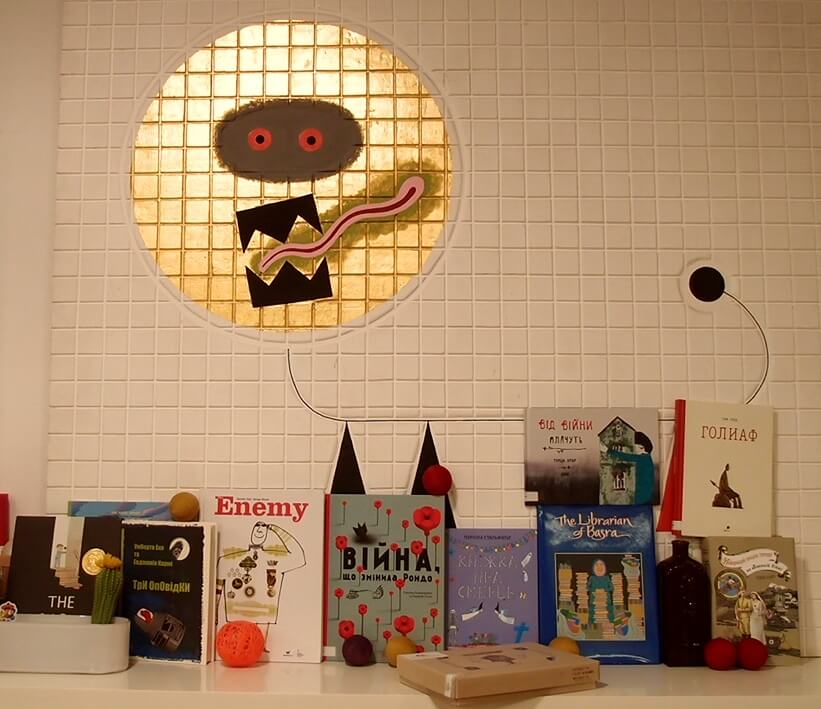 In this review, please, find the books for children, parents, and teachers on contested topics of the past.

When developing the education program to accompany the "(un)named" exhibition we posed a question yet again: Could there be "topics not for children"? How do we talk about such difficult aspects as violence, trauma, genocide, ethnic purges? How do we find a proper language not to traumatize but to evoke compassion with children? How to transform child anxiety into the state of security? Who is the enemy and could s/he have a human face? Who is the hero and could s/he become an anti-hero? What is the value of human life?

For the most part, parents and teachers try to protect and save children from topics of violence. Such topic often remain untold and unvoiced until a child comes across this sort of content in the media with no explanations or context. The information space around children is full of complicated concepts thus provoking many questions the adults are not able to answer. Children do not live in a vacuum but receive information every day from different media, social networks, at school, or in the streets. There is a need to find simple language for conversation on complicated things in order to establish understanding, not to traumatize them.

We offer a brief review of children books that present these complicated topics in a literary and artistic way, and help parents and teachers start a conversation, answer the questions, and provoke contemplation and discussions. They often have anti-military nature, with no propaganda, no heroism, no pathos, or judgements. They focus on personal stories and human face of historical events. The books could be read together with children to discuss complicated topics and subjects.

"The Boy in the Striped Pyjamas", John Boyne

The Book on tragic events through the eyes of a child. The story was also made into a film and translated into 50 languages. The novel is written for teenagers and adults, it does not have any scenes of violence. It subtly develops a personal story at the background of tragic events and losses. There is still place for friendship, compassion, human attitude and salvation.

"The Whispering Town" by Jennifer Elvgren as illustrated by Fabio Santomauro is based on a true story about a small Danish town occupied by the Nazis, and a girl Anet. It is a drama about humane attitude and a view on contested history in the words of a small girl. One morning, Anet wakes up and learns that the ‘new friends’ are hiding in a secret room in their cellar. It is a Jewish boy Karl and his mother who are waiting for a fishing boat to take all Jews away to a safe Sweden in three days. You feel like getting back to the book to see again the impressive illustrations, the choice of colors, brief but deep phrases and quotes. "Diktator", Ulf Stark, Linda Bondestam
The "Dictator" by Ulf Stark is a best-seller. It is ironic, eloquent, and thought-provoking. The story tells that violence never produces any love, friendship, or other amiable emotions. It tells that the enemy is also a human being and could have similar desires as you. Funny illustrations and collages by Linda Bondestam add naivety and light absurdity to the story as they absolutely fit the incompatibility of dictator’s grandeur.

The "Maus" by art Spiegelman is a comic book telling a story of the Holocaust and impersonifying heroes as animals. In 1992, the graphic novel was awarded with the Pulitzer prize. The story tells about US present days. A young comic strips author of Jewish origin Art Spiegelman works on the book on the Holocaust. His father Vladek survived the events and shared his own story of surviving the 20th century Catastrophe. "The Librarian of Basra", Jeanette Winter

"The Librarian of Basra" by an American author Jeanette Winter is a book about a very special act of heroism no one expected from this person in extremely turbulent times. The story tells about Ms. Alia who sacrificed herself to save a library when the bombing of an Iraqi city of Basra started. "It is a view on the war with the eyes of a civil woman, but not a mother, a wife, or a sister. Besides, the story is interesting with its open ending. The book finishes but the war in the book is not over. We cannot see any romantic triumph or a romantic bitter victory of any of the parties, or any victory at all. Instead, all finishes (or is still under way) with the waiting – it is waiting for the end and hope for a new better library (or the world)."*

The story of Nabu, a small refugee boy illustrated by Joanna Rusinek is touching, important and badly needed to discuss the present day problems of migrants, of human relations, and values. "It is the third book – it is a story about refugees and about how their life depends on us", - the author Jaroslaw Mikolajewski writes. The book is addressing both children and adults. Special tribute shall be paid to a visual part of the book that is sometimes louder than the text.

"Is the war meant for gilrs?" – it is a story of a girl Eli who was caught by the Second World War that had changed her childhood tremendously. A little Eli faced this cruel reality even though in August 1939 her friend Antek told her the war was not meant for girls. This statement was made with huge confidence by a 10-year-old boy, but it did not work. It failed to protect Eli from the tragic events of the mid 20th century.

"But she is just a little girl, and she should not be solving adult problems…" In war, or in peace, it is important for children to be merely children, while the most important thing is their safety. The topic raised by the book is significant as it shows the place and role of children during traumatizing events of the past. They are often excluded from the general historical narrative of the war mentioned only in war statistics.

"My Father is Lucky" – it is a story about the events of the Second World War, particularly about the Warsaw Uprising. The story develops around the family story but you can read between the lines some ideological calls and a lot of text-book type of materials. The book has a tint of excessive heroization, pathos, and very clear messages and calls for patriotism blurring the human face of the events. The story would perfectly fit as an additional illustration in teaching 20th century history in schools, rather than for a family discussion.

"Nazywam się Roman Kent. Dzisiaj jestem dziadkiem, ale dawno temu byłem małym chłopcem, który mieszkał w Łodzі" – it is the opening line in the story about friendship of Small Roma and his dog Lala taking place in Lodz ghetto who could help understand what war, violence, and dehumaization were. It is a heart-wrenching narration based on true story that could lay the ground to conversations about the Holocaust with a child. The book is illustrated by children, the same age as the protagonist. Their drawings presented in the book are sincere and very aptly reflect the mood and emotions during reading.

"The Enemy" — it is an antimilitarist book by an Italian writer Davide Cali. The book shows a human face of war, without heroes or antiheroes, thus deconstructing the image of the enemy. These are contemplations of a soldier about ‘the enemy’ in the trenches across. It is a simple and easy-to-read text narrated from the 1st person, with a good plot and brilliant ending. It is ‘happening’ only due to laconic illustrations by a French artist that made the book a bestseller of world children literature. The book introduces to us a girl who has just turned 13. She celebrates her birthday with her friends and family and decides to start her diary on that day. She starts writing letters to her imaginary friend Kitty. Anne Frank and her family were hiding in 1942 - 1944 from the Nazis in a shelter arranged in a house in Amsterdam. After being arrested by gestapo the 15-year-old Anne died in the concentration camp Bergen-Belsen. Her diary was published in 1947 by her father.

Meanwhile, the comic books author Ari Folman is working on the animated cartoons to come out in 2019.

Most books are freely available in the library at the Center for Urban History, in the education programs unit (EDUP).  The corpus includes about 2 000 books for children, parents, and teachers.