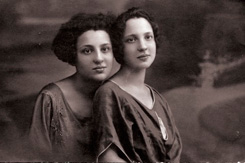 House of Meetings with History, Warsaw

The exhibition portrays social relations and questions of identity in a cultural borderland, based on the history of the Galician town of Sniatyn. Prior to World War II the town had been home to a multicultural community of Ukrainians, Jews, Poles, Armenians and Germans. Snapshots from their family albums reveal the town’s past, its institutions, neighborly relations and entertainment. The majority of the photographs were taken by the Jewish photographer Ignacy Schmitzler, who photographed people of various ethnicities and social classes in his studio. Schmitzler, the town’s photographic chronicler, will take the viewers on a tour of Sniatyn’s streets, where its inhabitants lived and met. The exhibition is based on a research of memory, with the use of novel interactive forms of communication, including social networks and genealogical portals.

The projects draws attention to continuity and discontinuity in the discourse of the past of the western Ukrainian town of Sniatyn. It focuses on various ways its residents, people of various ethnicities, saw their city before it drowned in the horror of the Holocaust and deportations. It shows how Ukrainians, Jews and Poles created images of prewar Sniatyn, and how recent changes could bring these divergent paths together. The project also focuses on the study of individual experience, lived or passed on through the family, and the discourse of the town as created by its civic institutions. Also studied were the influence of pilgrimage, the visits by people with roots in the town, and international events, together with their influence on the cultural memory of the town. The project is coordinated by Dr. Olga Linkiewicz (Institute of History, Polish Academy of Sciences, Warsaw, Poland).The exhibition is the conclusion of an indisciplinary study of the cultural memory of Sniatyn’s past in eastern Galicia, The study had been implemented by the Center for Urban History, the Institute of History at the Polish Academy of Sciences in Warsaw in cooperation with the Institute for Ethnology and Cultural Anthropology at the Warsaw University and the Lviv Polytechnic University, as well as the "Memory Ways" Program of the Geschichtswerkstatt Europa, and the "Memory, Responsibility, and Future" (EVZ) in 2010.