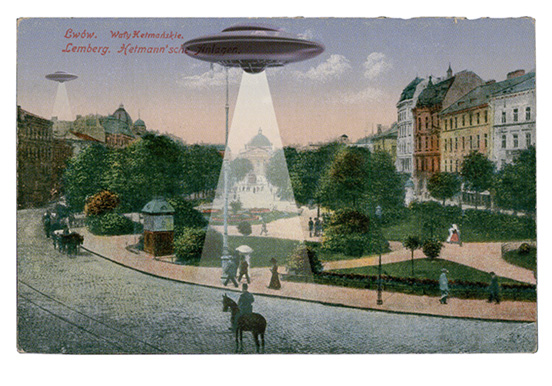 The exhibition presents works authored by Maciej Bohdanowicz from the project "Imitation of Truth. Is It?" and by Yevhen Ravskyi from the "Halywood" project combined in one collage style. The works by the artists present a bright example of creating metaphoric layers that combine several levels of events within one visual style. It makes the viewers lose orientation in a historical context. The works by Bohdanowicz/Ravskkyi not only stand for the space of an emulated authors' world but also for the place for generating new symbols and interpretations among the audience.

The birth of photography was considered a revolutionary point in recording the reality, even though the paper could only record fragments of the whole world. It allowed the mankind to better develop a visual archive and collective historical memory. Instead, it was already in the 19 century that photographers started using elements of visual manipulation.

"I corrected conventional landscapes a bit, with the help of grotesque images at the intersection of daydreaming, fantasies and modern imagery. Traditional collage tools could be replaced here by some technologies but the spirit remains the same," a photo artist Maciej Bohdanowicz comments on his project "Imitation of Truth. Is It?"

At the same time, the "Halywood" project by Yevhen Ravskyi also uses collage to "complement the reality." The play on words with a popular and well-recognizable name Hollywood that has already become a symbol, to signify the country of cinema, or the country of dreams, when combined with the Latin Haly (short for Halychyna), shows the capacity of Halychyna and Lviv. First meeting with the "Halywood" project by Yevhen Ravskyi was in 2008 under the Week of Actual Art. Today, his works have acquired a new context.