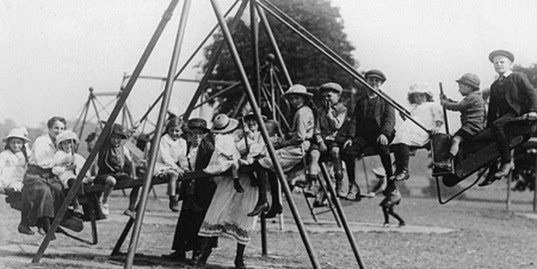 "Clean the Streets!" or the Story of Having Playgrounds in Ukraine

Institute of History of Ukraine at NAS of Ukraine

Specially allocated areas for active leisure time for children appeared in the mid 19th century. They were preconditioned by three factors: development of psychological and pedagogical knowledge, rapid urbanization induced by industrial revolution, establishment of a modern way of urban life. In order to organize and control leisure time of the youngest urban citizens, authorities and community tried to take them away from the streets, to separated them from the "spoiled world", the homeless, criminals, beggars, and "bad company" to provide for certain conditions for physical and spiritual growth. Local self-government, non-governmental organizations, and individuals in big cities in Western Europe and North America arranged sandpits, gardens, and playgrounds.

In 1887, the same idea developed in Odesa where they developed in the next five years the Children’s Garden in the central part of the city, a playground in the Duke Garden, and arena for school games in Oleksandr Park. The public spaces for children were the first in the Russian Empire. After much positive feedback in mass media, other big cities got their interest, too. Sometimes, they came to Odesa specifically to learn about the functioning of gardens and playgrounds. Later, similar spaces appeared in Kyiv, Moscow, Petersburg, Kharkiv, and other cities.

During the lecture, several themes will be presented: 1) from idea to implementation – who, why, and how; 2) organization, functioning, and rules for use; 3) gender and exclusion on the playground in a modern city.