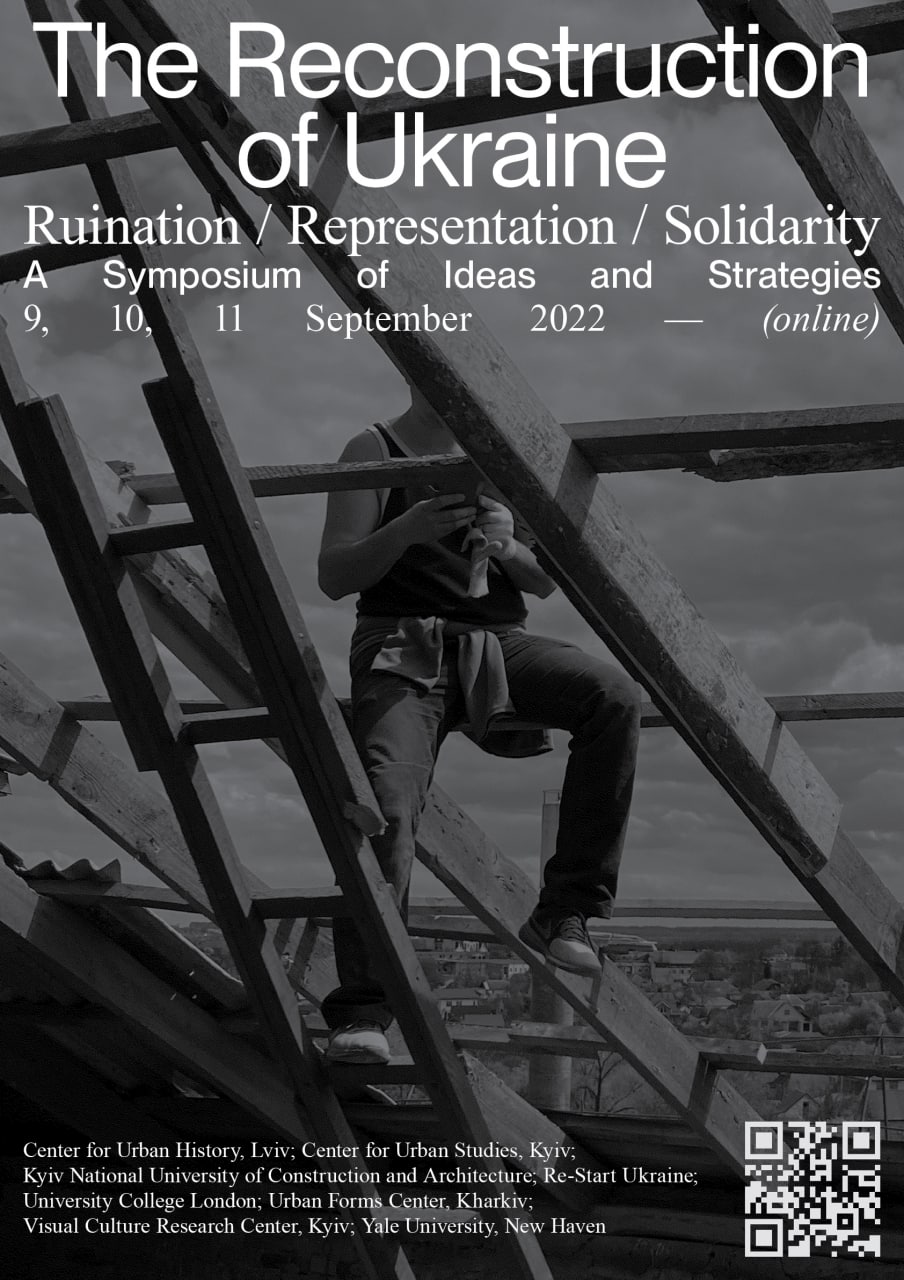 [A Symposium of Ideas and Strategies]

Ukraine is being subjected to physical, economic, environmental and symbolic ruination perpetrated by Russia. The war began on 20 February 2014, resulting in the occupation of Crimea and the destruction and occupation of sections of the eastern Donetsk and Luhansk regions. On 24 February 2022, it escalated into a full-scale invasion which has seen wholesale destruction of Ukraine's built, social, psychical and ecological fabric. As of September 2022, conservative estimates suggest that several tens of thousands of people have been killed. Mariupol, a vibrant seaside city of a half million people, has been razed to the ground and de-populated. Kharkiv, Ukraine's historic second city, has seen thousands of its buildings and infrastructural objects obliterated.  Over ten million people have been internally and over five million externally displaced. Untold thousands of women and girls, but also men, boys and trans- and cross-gender people have been subjected to sexual violence and abduction by Russian soldiers. At the same time, Ukraine's armed forces - and volunteer armies, both armed and civilian continue to fight, resist, organise, push back, regroup, and, already — to reconstruct.

How can – and how do – we begin thinking about reconstruction and postwar futures while the war is still raging, cities and landscapes continue to be pulverized, and humans and animals brutalized? How can we imagine and generate the shape of post-war Ukraine, or even make sense or adequately represent the current landscape of destruction, when we do not yet know the full extent of destruction nor the shape of the country's – nor even of Europe's – post-war borders? How, furthermore, can we isolate the specificity of Ukraine's destruction and reconstruction in the face of myriad (in)commensurable historical and contemporary examples?

Russia's war on Ukraine has laid bare the fact that we are living through the most important shift in the global order since the end of the first Cold War. As such, this symposium attempts to offer a forum for envisioning the scope and shape of Ukraine's future architecture (understood in its broadest consideration); while respecting the complexity of a country vast in territory, diverse in ethnic, racial and religious composition, and long in memory. This symposium is initiated and organised by a network of leading Ukrainian and international research and cultural institutions. It attempts to forge sustainable networks, alliances and solidarities; and to give rise to new, multi-directional initiatives and processes in an effort to enable a project of rebuilding in Ukraine that is nuanced, empathetic and ecumenical.

Despite the protracted nature of Russia's war in Ukraine, the process of planning, strategizing – and imagining – the reconstruction serves to posit futurity despite ruination. The historical examples around planning for the rebuilding of many cities destroyed by war – from Warsaw after 1939 to Rotterdam after 1940 to Beirut after 1975/2006, Sarajevo after 1996 and Aleppo after 2011 – provide testimonies of reconstruction that began almost immediately after the outbreak of war. These projects of reconstruction were led by architects who stayed put and carried out their work of documentation and design in secret or under fire; but also by displaced practitioners who worked in exile while consolidating under the umbrella of ad-hoc institutions housed by safe place design institutes and universities. In this respect, Ukrainian architects and urban planners have already started the process of envisioning and designing the post-war contours of destroyed cities such as Mariupol and Kharkiv.

The reconstruction of Ukraine will be strategized, designed and implemented by architects, cultural actors, researchers in different disciplines, government and municipal officials and businesspeople, engineers and labourers. Many of these actors have stayed put in the unoccupied and liberated sections of the country. Many others – predominantly women because of Ukrainian military conscription laws – experts, practitioners and scholars are now being hosted by institutions abroad. These Ukraine-based and internationally-based actors must have clear and coherent lines of communication and collaboration.

HOW? PARTICIPATION & TRANSFORMATION BEYOND ARCHITECTURE

Architecture is not enough. Reconstruction is a transdisciplinary and participatory enterprise, which also takes place on the level of social relations, institutional formations, psychosocial experience and eco-systems. Reconstruction is also, potentially, a heterodox, experimental process of re-imagining and re-thinking; and also of transformation and decolonisation.

This symposium devotes particular attention to cities, architecture, art and culture but the scope of the conversations it aims to start is broader. In due course, the discussions held during the symposium will coalesce into myriad separate projects, initiatives and experiments undertaken by government institutions, municipalities, educational and cultural bodies and other more interstitial actors. The ambition of this symposium is to establish a platform for dialogue, facilitating communication, collaboration and constructive argument between these diverse actors and initiatives.

The symposium will not be divided into traditional panels, but into dialogical roundtables. Participants will deliver short presentations, but the majority of the time in each roundtable will be devoted to open, dialogical, critical discussion between participants and audience members.

While a majority of the participants will be Ukrainian, most will also feature non-Ukrainian experts, theorists or practitioners able to situate the Ukrainian experience in diverse temporal, disciplinary and geographic contexts.

Please follow a link to find a program. To join the symposium, please register.

Supported by the Fund of the President of Ukraine for Education, Science and Sport

The photographs illustrating the symposium are taken by Vitya Glushchenko, documenting his work in grassroots reconstruction initiatives in Ukraine.